Australia reached 102 for two in 25 overs against India in the seventh CB Series ODI match at the Gabba in Brisbane on Sunday. 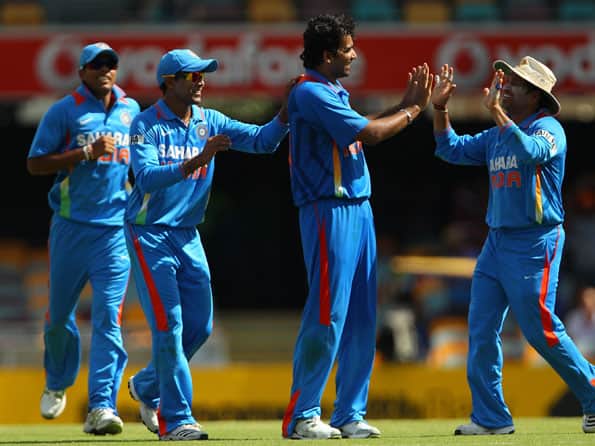 Australia reached 102 for two in 25 overs against India in the seventh CB Series ODI match at the Gabba in Brisbane on Sunday.

Openers got Australia to a steady start with David Warner and Mathew Wade putting up a 70 run partnership for the first wicket.

Irfan Pathan made the first breakthrough for India when he had Warner caught by Sachin Tendulkar for 43.

Zaheer Khan then struck to send back out-of-form Ricky Ponting for seven just before the 20th over.

Wade and Peter Forest then joined forces as they got down to rebuilding the Australian innings.

Earlier, Ponting won the toss and elected to bat.

Australia made one change to the squad. Pacer Clint McKay is out with an illness, making way for Ben Hilfenhaus in the playing XI.

For India, opener Virender Sehwag’s problematic back continues to keep him out while pacer Zaheer Khan comes in for off-spinner R Ashwin.

India are currently leading the table with 10 points from four matches. Australia have nine from four while Sri Lanka has seven from as many games.