Sachin Tendulkar and Rahul Dravid's 117-run stand for the third wicket gave India the edge at the end of the second day's play at Melbourne Cricket Ground against Australia. India reached 214 for three at stumps with Rahul Dravid (68*) and Ishant Sharma (0*) at the crease trailing by a further 119 runs. 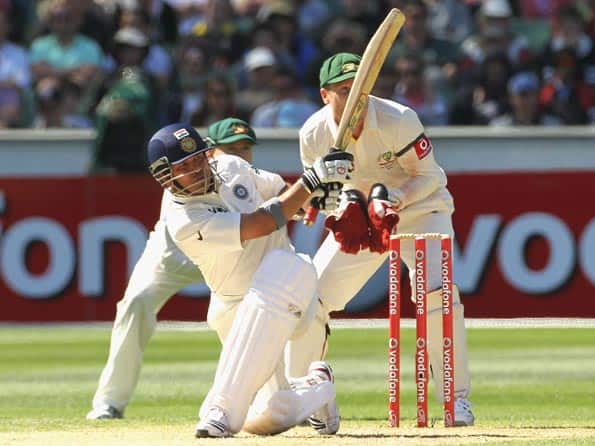 Sachin Tendulkar and Rahul Dravid’s 117-run stand for the third wicket gave India the edge at the end of the second day’s play at Melbourne Cricket Ground against Australia. India reached 214 for three at stumps with Rahul Dravid (68*) and Ishant Sharma (0*) at the crease trailing by a further 119 runs.

The fond hopes of Sachin Tendulkar’s 100th international century were rudely cut short minutes before close of play on the second day of the first cricket Test against Australia at the Melbourne Cricket Ground (MCG) here Tuesday but the batting maestro along with Rahul Dravid hit crucial half-centuries to take India to a comfortable 214 for three in their first innings.

Dravid was unbeaten on 68 along with nightwatchman Ishant Sharma at stumps as India still trailed by 119 runs, in response to Australia’s 333 all out in the first innings. Tendulkar was well set for his much-awaited milestone century but was bowled by an excellent delivery from Peter Siddle on 73.

Tendulkar’s wicket, just three balls short of stumps, provided the Australians the much needed relief, especially Siddle, who four overs back had rattled Dravid’s stumps, on 65, but the video review found that Siddle had bowled a no-ball.

Both Tendulkar and Dravid helped India recover from 97 for two with their valuable 117-run stand for the third wicket.

Tendulkar walked out shortly before the tea break after the dismissal of Virender Sehwag, who entertained the MCG crowd with his carefree 67 off 83 balls. Tendulkar received a standing ovation from a 50,000 MCG crowd as he walked out to play probably his last Test at the historic ground.

Tendulkar didn’t disappoint and entertained the crowd by lifting the first ball, in the post-tea session, for a six over the slips. His wide array of strokes were a delight to watch. Tendulkar got to his half-century in 55 balls shortly after batting partner Dravid did likewise in style with a four off Ben Hilfenhaus.

Dravid dropped anchor and allowed Tendulkar to score runs briskly. Tendulkar hit eight fours and a six in his 98-ball innings before being castled by a Siddle delivery that went through the gate and crashed onto his stumps.

Earlier, India lost Gautam Gambhir (3) early in the eighth over as the left-handed batsman chased a wide delivery from Ben Hilfenhaus and edged behind to the wicketkeeper. The wicket came an over after a mild altercation between James Pattinson and Sehwag when the Indian opener complained that, when running for a single, the young pacer had brushed too close to him in his follow through.

Sehwag lived dangerously and added 75 runs for the second wicket with Dravid. Sehwag struck seven fours during his stay and was dismissed when in his attempt to hit a cover drive off James Pattinson his inside edge crashed onto his stumps.

India’s pace spearhead Zaheer Khan and off-spinner Ravichandran Ashwin took two wickets each in the first session to bowl out Australia for 333 in the first innings shortly before the lunch break.

Australia, resuming at the overnight score of 277/6, survived just 21 overs during which they added 56 runs and achieved a par total at the MCG. Zaheer finished with figures of four for 77 while Umesh Yadav and Ashwin bagged three wickets each.

Zaheer struck in the second over of the day to remove overnight batsman Brad Haddin (27). The Australian wicket-keeper stretched out for a fading ball and edged to Sehwag at gully. He walked from the pitch but had to wait several minutes on the field as the third umpire reviewed whether the bowler had bowled a no-ball.

Peter Siddle also departed soon after he was squared up by a late shaping out-swinger from Zaheer and edged behind for 41.

Hilfenhaus (19) and James Pattinson (18 not out) added a valuable 27 runs for the ninth wicket. Hilfenhaus was eventually out caught in the deep after he attempted to hit Ashwin out of the ground and Nathan Lyon (6) misjudged a sweep and was bowled behind his leg by a straight ball by the off-spinner.