Australian captain Michael Clarke has won toss and asked India to bowl first in the fourth Test match at Adelaide Oval in Adelaide. 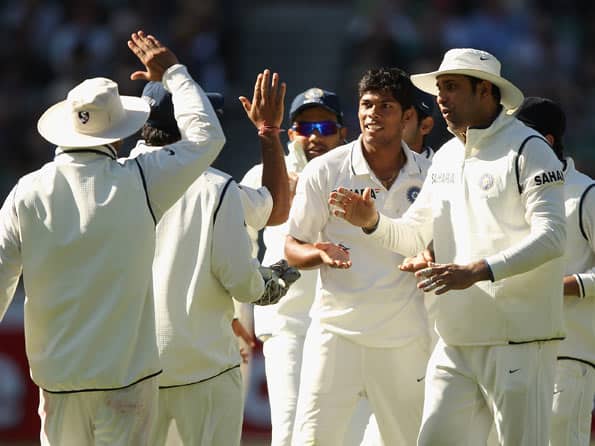 Australian captain Michael Clarke has won toss and asked India to bowl first in the fourth Test match at Adelaide Oval in Adelaide.

The series is lost and their reputation is in tatters but India will make a desperate bid to avoid a whitewash when they take on Australia in the fourth and final Test at Adelaide on Tuesday, hoping to redeem some of the lost pride.

India have already conceded the Border-Gavaskar Trophy after a humiliating innings and 37 runs loss at WACA, Perth last week and the reputation of their top players is almost beyond repair.

Yet the last-ditch stand could help revive their careers or at least allow them to go out on their own terms.

Openers Gautam Gambhir and Virender Sehwag are in urgent need of revival as they have slipped into technical inertia and have neither shown the will nor scores to justify facing up to the new ball.

Between the two, Gambhir has tried harder and looked to leave as many deliveries as possible on his off-stump yet old habits still see him poking his bat at away going deliveries.

Sehwag, who is India’s captain for the fourth and final Test starting on Tuesday after Mahendra Singh Dhoni was banned for the team’s slow over-rate, has endured a poor run in the series which his side has lost 0-3 already.

“This is the best bowling attack I have seen, especially Australia. They are not giving easy balls to hit boundaries, they are playing with your patience,” conceded Sehwag.

Sehwag has scored just 118 runs at 19.67 with one fifty from the series and he is still searching for those boundary-balls from the Australians.