India are still 76 runs ahead and any lead in the match would be crucial for them in this Test.

India will aim to bundle out England and take a first-innings lead when play resumes on Day Three at Lord’s, with England at 219 for six. India are still 76 runs ahead and any lead in the match would be crucial for them in this Test.

Earlier on Day Two,  England captain Alastair Cook suffered yet another failure with the bat as Bhuvneshwar Kumar kept India on top on the second day of the second Test at Lord’s.

Fast-medium bowler Kumar took an impressive four for 46 in 23 overs, his haul including all of the top four England batsmen as the home side reached stumps on 219 for six. That left them 76 runs behind India’s first innings 295 after Cook had fallen for just 10. Only Gary Ballance (110) and Moeen Ali (32) offered much resistance in  a fifth-wicket stand of 98 after England slumped to 113 for four, AFP reported. 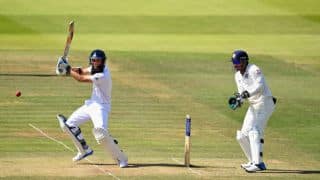