Hello and welcome to CricketCountry’s live cricket blog and updates for the fifth day’s play in the fourth Test, between India and England.

Hello and welcome to CricketCountry’s live cricket blog and updates for the fifth day’s play in the fourth Test between India and England at Wankhede Stadium in Mumbai. This is Suvajit Mustafi, and I will bring you the live cricket updates from the day’s play. India are on the verge of winning another Test and in turn the series, as England ended Day Four at 182 for 6, still trailing by 49 runs. Responding to England’s first innings total of 400, India scored 631. It was Virat Kohli’s 235 that led India’s reply, and he was well supported by Murali Vijay (136) and Jayant Yadav (104).

Kohli brought up his third double-ton of the year. He has scored a double-ton in the three consecutive series that he has played. First in West Indies, then against New Zealand at Indore and now against England. Prior to this year, Kohli had no double-ton in First-Class cricket. Not only he registered the highest score by an Indian captain but also the highest score by an Indian batsman against England. He broke a plethora of records, bringing India to the brink of another famous victory. India have lost their last two Tests against England at Mumbai, and therefore we can expect a refreshing change in pattern.

However, the other star of the day was Jayant, who is playing only his third Test. The Haryana off-spinner joined Kohli on Day Three at 364 for 7, and went on to add 241 runs for the eighth wicket. This is now the highest eighth-wicket stand in history of Indian cricket and Jayant’s 104 is the highest score by a No. 9 Indian batsman.

“Whenever you’re batting with Virat, things feel easier,” he said after the day’s play before adding that he is happy to continue batting at No. 9.

Later in the day, Jayant went on to claim the wicket of Joe Root, who was looking in a fine touch, scoring a counterattacking 77. Earlier, Bhuvneshwar Kumar dismissed debutant Keaton Jennings for a golden duck. The first innings centurion was trapped leg-before early in the innings. ALSO READ: List of records made by Virat Kohli during India vs England 4th Test

Jennings’ opening partner and England skipper once again fell to Jadeja’s trap by playing across. The wicket helped Jadeja complete 100 Test wickets in his 24th Test. He joined the illustrious list of Ryan Harris, Jason Gillespie and Lance Gibbs, and only Shane Warne and Glenn McGrath took a Test lesser to get to the elusive mark.

While Jonny Bairstow continued the resistance, Ravichandran Ashwin went on to claim 2 wickets at the stroke of stumps to bring closer to the winning line. Ashwin now has 243 Test wickets, and has now gone past Bhagwat Chandrasekhar’s tally of 242 wickets.

England will have to produce a special show on a wicket that is turning square. The onus is on Jonny Bairstow and Jos Buttler. By all means, it is India’s game from here. 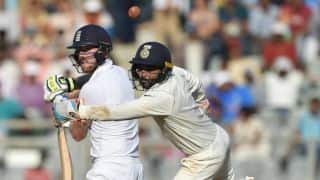