The Indian batsmen will be looking to make full use of the remaining day in the practice tie.

Indian bowlers’ good show on Day one against New Zealand XI in Whangerei gave renewed hopes to the team management that there is still fight left in the much-maligned pace bowling unit.

Ishant Sharma, who has been under a lot of public ire after his wayward performances of late, scalped two wickets but is yet  to prove that he isn’t yet easy pickings for the New Zealand fringe players, finishing with an economy rate of over four per over. Test specialist and the lynchpin of the Indian bowling attack, Zaheer Khan was tidy even though he picked up just the one wicket and even off-spinner Ravichandran Ashwin came up with a much improved performance finishing with figures of two for 45.

The star with the ball came through an unlikely source in Ishwar Pandey, who finished with figures of three for 42. Pandey’s performance might just reward him with his first Test cap in the upcoming Test series, starting on February 6.

New Zealand XI also unearthed a genuine Test prospect for the future in 19-year old opener Robert O’Donnell, who was the top scorer with 80. O’Donnell was in a punishing mood and showed all the ingredients to be a good Test player after his stellar show against India’s frontline bowlers.

After the hosts declared at 262 for nine, Indian openers looked steady and were determined to make best use of the two-day with openers Shikhar Dhawan and Murali Vijay seeing India through without the loss of wickets with the score on 41.

Day two will be a crucial day for the Indian batsman especially Dhawan, who had a torrid time in the One Day International (ODI) series. 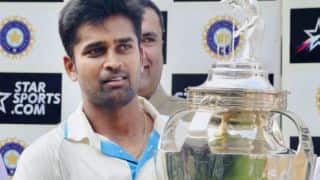 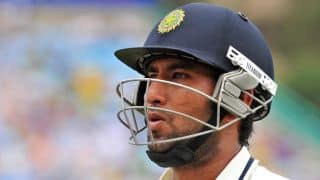