Hello and welcome to the live blog of the first Test between India and South Africa at Cape Town.

Hello and welcome to the live blog of the first Test between India and South Africa at Cape Town. I, Vishal Mehra, will be bringing all the live updates, highlights as well as funny posts from the social media universe. Day Three was washed out, and there are chances of rain playing spoilsport on Monday as well, making it even bluer for us.

Hardik Pandya and Bhuvneshwar Kumar came to the rescue on Saturday when the mainstay batters pushed India in the woods with uncharacteristic strokeplay. Pandya launched a counterattack, while Bhuvi played second-fiddle. The 99-run stand saved India from disgrace. Pandya exploited the two drop chances and scored a scintillating 93. India, however, ended up trailing by 77 runs.

There were some nervous moments at the twilight of Day Two for South Africa, but they were happy with the 142-run lead on a track that has purchase for the pacers.

Dale Steyn will not participate further due to injury. It was confirmed that Steyn has sustained a tissue injury on his left heel which is likely to keep him out of action for 4-6 weeks. 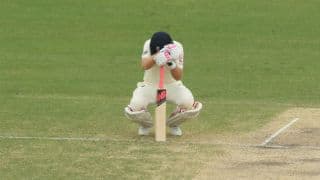