Hi folks! Welcome to CricketCountry’s coverage of Day Two of the second Test of the Gandhi-Mandela series between India and South Africa at the M Chinnaswamy Stadium in Bengaluru. I am Shiamak Unwalla, and I will bring you all the live cricket scores and updates of this match. The Indian spinners, Ravichandran Ashwin and Ravindra Jadeja, shared eight wickets between them to rout South Africa for a disappointing 214 before the openers Shikhar Dhawan and Murali Vijay added a solid and unbeaten 80 runs for the first wicket as India took complete control of proceedings on Day One. LIVE CRICKET SCORECARD: India vs South Africa 2nd Test at Bengaluru

2:00 Update: BAD NEWS folks. Play has officially been called off on Day Two. Given that one innings has already been completed and batting is not likelier to get easy in the coming days, we could still see a result in this match. Play will begin 15 minutes early tomorrow, at 9:15. That’s all we have for now. Do log in tomorrow! Have a lovely Sunday. DAY REPORT: India vs South Africa 2015 2nd Test at Bengaluru, Day 2: Play called off due to persistent rain

Here are the session timings for Day 3 of the 2nd Test match. Play will start at 9.15 am IST #IndvsSA pic.twitter.com/FZY7f5UKxZ

11:30 Update: The first session is washed out. Hope we can get some play later on.

10:00 Update: Looks like the covers are coming off. Play should hopefully start soon!

Covers coming off at the M Chinnaswamy Stadium, Bangalore #IndvSA

9:45 Update: Still no good news. The rain has persisted.

Slight drizzle at the moment on the ground! Hopefully, there’s some wind which will take the clouds away! #INDvsSA

9:30 Update: Rain has played spoilsport, the start has been delayed.

Expecting a delay in the start of play. Umpires are out on the field for inspection. More updates in a bit. #IndvsSA https://t.co/jZcGEzkZaB

As reported by AFP, South African coach Russell Domingo said, “At the moment we are obviously too far behind in the game, but things can change fast because six to seven wickets can fall in a session.” Ravichandran Ashwin said of de Villiers, “AB is a world-class batsman and played his strokes, but I thought he was a bit edgy today.” He continued, saying, “There was not much for us in the pitch but we bowled well. Even when AB was batting, we were able to maintain control by taking wickets at the other end.” READ: Ravichandran Ashwin, Ravindra Jadeja prey on batsmen’s doubts in India vs South Africa 2015, 2nd Test at Bengaluru 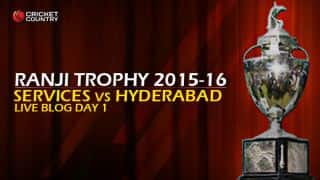