Catch the Live Updates of the 2nd ODI between India and Sri Lanka at Ahmedabad here.

Another clinical performance by India as they take a commanding 2-0 lead in the five-match ODI series. Sri Lanka were far from their best today, and the absence of their key bowlers cannot be blamed for this loss wherein their batsmen found if tough. India continue to make amends and this win puts them in a strong position to take this series. Ambati Rayudu will he a happy man today, having scored his maiden international century finally. He has been awarded the Man of the Match award for his unbeaten 121 not out. Read Varun Arora’s match report here to find out more about India’s show today.

Shikhar again throwing away his wicket. He should graduate to making them all count in bigger numbers @BCCI #IndvsSL

India 141/2 | Overs 27
A Rayudu 51 (63), V Kohli 0(0)
Some respite for Sri Lanka. Dhawan keeps the match interesting by gifting his wicket away. He goes for a big shot on the leg-side and Priyanjan at deep square-leg takes a simple catch. Virat Kohli walks out to bat.
OUT! Dhawan c Priyanjan b Prasanna 79(80)
India 138/1 | Overs 26
S Dhawan 78 (78), A Rayudu 50 (59)
A well-deserved half-century for Ambati ayudu. He looked rusty at the start playing out a lot of dot balls. He played a clever shot on the off-side, more of a slice which pierced the off-side field for four. He picks a single on the next ball to get to his fifth ODI half-century.
India 130/1 | Overs 25
S Dhawan 76 (76), A Rayudu 44 (55)
Rayudu hits this clean. Straight bat, timed well and hits the advertisement board for six. Dhawan on the last ball pierces the off-side and adds four more. He is looking unstoppable now. 12 from that Dhammika Prasad over.

Shikhar Dhawan is a true artist with the bat. Even a full-blooded bludgeon is a feathery caress in his hands.

With every blow from Shikhar Dhawan, Sri Lanka’s frustration will grow. Was a big edge!

India 107/1 | Overs 22
S Dhawan 66 (69), A Rayudu 32(45)
That is one of the magnificent shot you will see in the day. He anticipated the bowler’s length, came down the track and drives it over the bowler’s head for a huge six. He took 42 balls to his first boundary and from tehreon, he is looking unstoppable. 100 up for India with a four. Perera bowled this short and Dhawan walked across and gudied it on the leg-side for four. The third ball was delicately placed towards thirdman for yet another four. It’s a quiet last three balls of the over. 16 from the voer.
India 91/1 | Overs 21
S Dhawan 51 (65), A Rayudu 30(42)
Dhawan seems to be ready to unleash himself. Smacks a boundary towards squareleg off Dhammika Prasad’s bowling. Gets to his 10th ODI half-century.
India 84/1 | Overs 20
S Dhawan 45 (60), A Rayudu 29(41)
Changfe in bowling, Seekugge Prasanna has been brought on and the over yields 13 runs. Dhawan picks a couple on the second ball, follows it up with a straight lofted shot over the bowler’s head for four. On the last ball of the over, Rayudu manages to hit one more four over midwicket. Juicy full-toss.
India 71/1 | Overs 19
S Dhawan 36 (55), A Rayudu 25(40)
This was one opportunity for Rayudu to impress up the order and lead this challenging chase. Couple of runs to start the over but not much from the rest of it. These two batsmen need to get going to give their skipper Kohli any breathing space for a free-flowing innings.
India 69/1 | Overs 18
S Dhawan 35 (54), A Rayudu 24(35)
Dhawan charges down the track and chips Dilshan over extra-cover and takes a couple. Two more singles from that over.

Virat could be lookng to control the back end a la Dhoni or giving Rayudu an opportunity to impress. Like him controlling from 3 though

India 65/1 | Overs 17
S Dhawan 32 (50), A Rayudu 23 (32)
While the Indian innings seems devoid of sparkles, the spectators are waving their mobiles and keeping some light in the stands. Maybe the batsmen finally heard the calls as Rayudu charges down the track to loft Randiv over long-on for a six.
India 56/1 | Overs 16
S Dhawan 30 (47), A Rayudu 16 (30)
Dilshan has been deployed to fill up the overs with his part-time off-spin. The batsmen come down the track and look to place in the gaps for singles. Just three foiurs in this Indian innings with 16 overs gone by. The pressure is slowly building up. 219 runs required in 34 overs.
India 51/1 | Overs 15
S Dhawan 27 (44), A Rayudu 14 (27)
Randiv continues from the other end. The batsmen are content placing in the gap and picking singles. Four from that over.
India 47/1 | Overs 14
S Dhawan 25 (42), A Rayudu 12 (23)
A single each on the first two balls of the over. Dhawan finally manages to break the shackles and whips Thisara Perera over midwicket for a boundary. That was a cracking shot. Surprisingly it’s the first boundary for him in this innings. Shows how much he has been tied down by the opposition.
India 41/1 | Overs 13
S Dhawan 20 (37), A Rayudu 11 (22)
Spin in the innings for the first time in the form of Suraj Randiv. Dhawan drives the second ball towards long-off and picks a single. Rayudu plays out the rest of the over watchfully. Just one from it.
India 40/1 | Overs 12
S Dhawan 19 (35), A Rayudu 11 (18)
Thisara Perera comes in to bowl replacing Lahiru Gamage. Tidy over, gave away just three from it.
India 37/1 | Overs 11
S Dhawan 17 (32), A Rayudu 10 (15)
Singles on the first two balls and the last two from that Prasad over. A few loose deliveries from Prasad byt Rayudu failed to capitalise on them.
India 33/1 | Overs 10
S Dhawan 15 (29), A Rayudu 8 (12)
A wide, a leg-bye and five singles from that over from lahiru Gamage. A quiet start from India in the challenging run-chase.
India 26/1 | Overs 9
S Dhawan 12 (26), A Rayudu 6 (9)
Dhammika Prasad consistently keeps it to back of length and Rayudu is unable to dispatch it away. All he managed was a tentative push. The fourth ball yet again is probing on the off-stump and he lets it go through tpo the wicketkeeper. Finally on the last ball of the over, he manages to get enough room to cut it away for four.
India 22/1 | Overs 8
S Dhawan 12 (26), A Rayudu 2 (3)
Whoa! How big a lifeline is this! Shikhar Dhawan gets an edge and Kumar Sangakkara goes up after taking a clean catch, the entire Sri Lankan side is appealing. But the umpire hasn’t heard it. Dhawan stays. Gamage denied a wicket here.
India 20/1 | Overs 7
S Dhawan 10 (20), A Rayudu 2 (3)
Sri Lanka have struck early in this game after putting up a good show so far with the ball. Rayudu has joined Shikhar Dhawan at the crease. India now need 255 runs to win from 43 overs.
India 18/1 | Overs 6.3
S Dhawan 9 (18)
There it is! Sri Lanka strike early and the in-form Ajinkya Rahane is walking back to the pavilion. Dhammika Prasad strikes on his third ball in the match to send back the Indian opener. Big wicket! Brilliant work by Jayawardene in the slips as he catches the ball which had bounced off Kumar Sangakkara’s gloves.
OUT! A Rahane c Jayawardene b Prasad 8 (19)
India 17/0 | Overs 6
A Rahane 8 (18), S Dhawan 9 (18)
India add four more runs to their total as Rahane and Dhawan continue to keep the Sri Lankan new ball bowlers at bay in this clash.
India 13/0 | Overs 5
A Rahane 7 (14), S Dhawan 6 (16)
India in no rush at all. They have a certain gameplan and they seem to be sticking with it. Four more runs added to the total. 262 more runs needed now from 45 overs with all 10 wickets intact.
India 9/0 | Overs 4
A Rahane 5 (12), S Dhawan 4 (12)
Gamage continues as Rahane faces him for the first time in the innings. India add only one run in this over with Dhawan taking a single on the third ball.
India 8/0 | Overs 3
A Rahane 5 (8), S Dhawan 3 (10)
Indian openers scramble to add four runs off Mathews’s second over. Remember, India would be looking to get off to a slow but steady start, preserve the wickets and then get on with the chase as they have plenty of batsmen in their ranks. Sri Lanka need early wickets to put pressure on the Indians.
India 4/0 | Overs 2
A Rahane 4 (6), S Dhawan 0 (6)
Lahiru Gamage comes on to bowl with the second new ball. He was impressive in the first game, and in this tie he starts off with a maiden.
India 4/0 | Overs 1
A Rahane 4 (6), S Dhawan 0 (0)
Ajinkya Rahane is away with a cracking four through the covers as Angelo Mathews begins the proceedings for Sri Lanka. India would be comfortable with the performance they produced with the bat in the last game. Sri Lanka will need quick wickets early on to out the hosts under pressure.

All set for India’s chase…

another top innings from sangakkara. love the way he picks the odd ball for four then goes back to knocking it around

So, Sri Lanka have made the tough call of dropping their opener Upul Tharanga, who struggled miserably in the last match and have included Kusal Perera in his place. Will this move work?

Toss: Sri Lanka win the toss and elects to bat first. Sri Lankan skipper Angelo Mathews looks forward to piling on some runs in the first innings. Ravindra Jadeja comes in place of Varun Aaron for the second ODI and skipper Virat Kohli is happy to play with three spinners.

Hello and welcome to CricketCountry‘s coverage of the second One-Day International (ODI) between India and Sri Lanka at the Sardar Patel Stadium in Ahmedabad on Thursday. I am Devarchit Varma, and I will be bringing you the live updates from the match.

The two sides meet at the Sardar Patel Motera Stadium, Ahmedabad for the second One-Day International (ODI) on Thursday. The first ODI was a largely one-sided affair, and the tourists looked undercooked and unprepared for the challenge. For this game, they would come in with better preparations and have already put in the hard yards in the nets. On the other hand, India would aim to keep up the intensity and deliver another performance.

Ahmedabad has often had help for spinners and that should help both sides. There could be some dew in play, which may push teams to opt to bat first if they win the toss. In the first game, Angelo Mathews took a similar decision and that backfired. India put up a huge score, which was way beyond Sri Lanka’s reach once they started slow. But, big scores are chaseable in India and if the wicket doesn’t crumble in Ahmedabad, it may be a better option to bowl first. 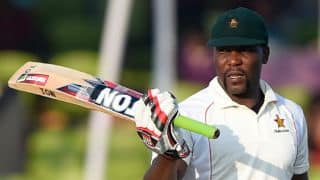 Zimbabwe bowled out for 368 against Bangladesh early on Day 4