Hello and welcome to CricketCountry’s live blog of Day 4 of the ongoing second Test between India and Sri Lanka. I am Suvajit Mustafi, and I will bring all the live updates from Nagpur.

Hello and welcome to CricketCountry’s live blog of Day 4 of the ongoing second Test between India and Sri Lanka. We at CricketCountry will be bringing all the live updates from Nagpur. Sri Lanka trail by 384 runs with 9 wickets remaining in the second innings. They lost Sadeera Samarawickrama in the very first over. Ishant Sharma darted one on off. Misreading the line, Sadeera let it bang onto the off-stump. Virat Kohli scored his fifth double-hundred, breaking a plethora of records. He equalled Brian Lara’s record of most double-hundreds (5) as a captain. Kohli’s 12th Test hundred as captain also took him past Sunil Gavaskar’s tally of 11, Mohammad Azharuddin’s 8, and Sachin Tendulkar’s 7. Runs came by hundreds at Nagpur, as Rohit Sharma became the fourth centurion of the innings. He remained unbeaten on 102, as India declared at 610 for 6. There was another double-centurion on Day 3. This time, however, runs were being conceded. Dilruwan Perera’s figures read 3 for 202. With the pitch getting better as the match progresses, Sri Lanka will have to apply themselves sensibly if they are to end it in a draw. For that to happen, they will have to bat out of their skins. 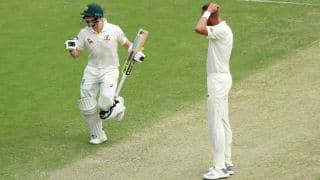