Good Afternoon/Morning! Hello and welcome to CricketCountry’s live cricket blog of the Australia women’s  tour of India. The three match ODI series is scheduled to be played at the Reliance Stadium, Vadodara. Australia have won both their warm-up games against India A played in Mumbai.

India women in their recent tour of South Africa  won the three-match ODI series by 2-1 and five-match T20I series by 3-1. Whereas, Australia defeated England Women in the ODI series of the Womens Ashes 2017 by 2-1 but lost the T20I series by 2-1. The Indian team would be led by Mithali Raj  whereas Australia team would be led by Meg Lanning. The Indian players to look for are Harmanpreet Kaur, Smriti Mandhana and Jemimah Rodrigues. The Australian player to look for are Ellyse Perry and Megan Schutt.

The last time the two teams met was in the ICC World Cup semi-final where India defeated Australia by 36 runs. Harmanpreet waas the star performer in the match scoring 171*. 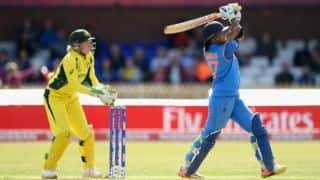