India women on Wednesday shot out England for a paltry 92 before the hosts hit back strongly, reducing the visitors to 71 for six in 34 overs on Day One of the one-off Test at Wormsley. Catch the live blog of the match here.

Medium pacer Nagarajan Niranjana was the wrecker-in-chief, returning impressive figures of four for 19, after the Indian skipper Mithali Raj elected to field at Sir Paul Getty’s Ground. Catch the live scorecard of the match here.

Tammy Beaumont (12) and Natalie Sciver (10) were the only two other English batsmen to have managed double digit scores, as the Indians relied on swing while bowling to a good line and length. England were bowled out in 41.2 overs, but recovered some of the lost ground when they came out to field, regularly troubling the Indian batsmen.

Medium-fast bowler Jenny Gunn had taken four wickets, giving very little away, as the host bowlers ran through India’s top and middle-order. Smriti Mandhana has been India’s top-scorer so far, making 22 off 67 balls. 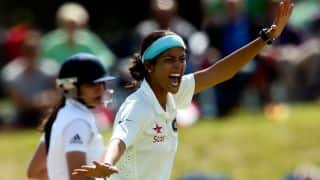