India win by eight wickets with 32 balls to spare. A thumping win for the host. They also leveled the five-match series 2-2 with one more game to go. Mithali Raj played a captain’s knock. Also Harmanpreet Kaur scored a quick-fire 32 off 25 balls.

So the partnership is broken. Smriti Mandhana is gone after playing a brilliant innings. Mithali Raj is batting well at the other end. Harmanpreet Kaur is the new batter in. India need just 48 more in 72 balls.

Half-centuries for Smriti Mandhana and Mithali Raj. The India skipper Mithali also reached another milestone. 5,000 ODIs runs for her. Great achievement for her. She has been an excellent ambassador of India women’s cricket. India are looking good to chase down the target.

Excellent partnership developing for India. Both Smriti Mandhana and Mithali Raj are batting very sensibly. India on course of their chase of 221.

OUT! First one own for India. Thirush Kamini wanted to clear the ground by couldn’t and offered a simple catch to Maddie Green at long-on. Meanwhile 50 up for India. Indian skipper Mithali Raj has come out to wicket now.

Indian openers have given their a solid start. Both Smriti Mandhana 13 and Thirush Kamini are batting quite well. They have negotiated the difficult part of the innings, now they need to build on this good start.

So its all over for New Zealand. They finish with a competitive score of 220. What a knock Sophie Devine has played. She scored 89 off 102 balls. This will be a tough target to chase for India women.

Another over where two wicket have fallen. This time Niranjana Nagarajan is the bowler. Meanwhile at the other end. Sophie Devine has scored his half-century and going fine.

OUT! A double wicket maiden for Rajeshwari Gayakwad. Two smiler sort of dismissals. First Katie Perkins, then Leigh Kasperek. Both are bowled round their legs. Though Sophie Devine is batting at exceptionally. She is nearing her fifty.

OUT: Katie Perkins b Rajeshwari Gayakwad 8 (17)

What a catch by Rajeshwari Gayakwad on her own bowling to get rid of Maddie Green! Timely Wicket for India. Katie Parkins is the new batter in. Sophie Devine is batting well at the other end.

Indian bowlers are slowly losing their grip. 100 up for New Zealand. Both batters are looking well settled at the wicket. Sophie Devine is looking very settled led at the wicket once again. Green is giving here company.

Back to back wicket for India. New Zealand Women are in bit of strangle at this moment. Both their set batswomen,  Suzie Bates and Amy Satterthwaite are gone. Indian bowlers are bowling tightly at this moment.

OUT: Amy Satterthwaite b Harmanpreet Kaur 43 (55)

It has been a very good start for the India Women. Jhulan Goswami got rid of dangerous Rachel Priest early and gave India an important early breakthrough in this do or die game.

New Zealand Women won the toss and elected to bat

Team Changes: New Zealand are playing an unchanged team. India have one change, Poonam Yadav comes in for Ekta Bisht

Hello and welcome CricketCountry’s coverage of the fourth One-Day International (ODI) between India Women and New Zealand Women at the M Chinnaswamy Stadium in Bangalore on Monday. The visitors are currently leading the five-match series 2-1, thanks to a comfortable six-wicket win over the hosts in the third game.

India Women failed in the batting department for the third time in the series, finishing at a total of 182 for the loss of nine wickets in 50 overs. Veda Krishnamurthy top-scored for the hosts with a hard-fought 63 off 86 balls, while Sophie Devine caused most of the destruction to the Indians by taking three wickets for 40 runs.

The White Ferns, in reply, never looked threatened during their innings. Skipper Suzie Bates and Rachel Priest provided a 125-run opening stand that pretty much sealed the game for good. The Indian bowlers looked out of touch for the first time in the series. MATCH REPORT: Indian Women vs New Zealand Women, 3rd ODI at Bangalore 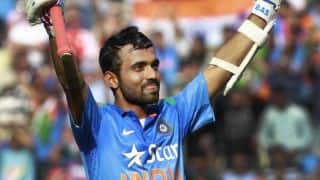 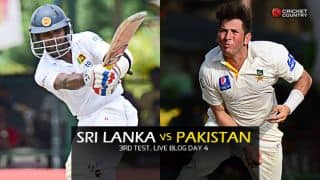