Chennai Super Kings (CSK) would be desperate to rediscover their consistency when they take on Royal Challengers Bangalore (RCB), also recovering from a defeat, in an Indian Premier League (IPL) 2012 match on Wednesday. 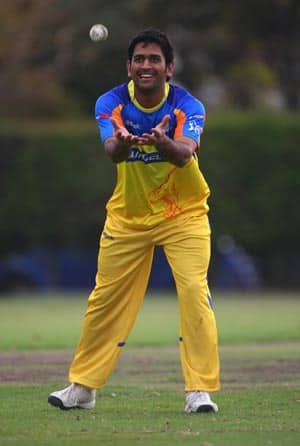 Chennai Super Kings (CSK) would be desperate to rediscover their consistency when they take on Royal Challengers Bangalore (RCB), also recovering from a defeat, in an Indian Premier League (IPL) 2012 match on Wednesday.

So far it has been a roller-coaster ride for the MS Dhoni’s team, looking for a hat-trick of titles, as they were outplayed at home by Mumbai Indians in the opening tie.

They bounced back to outplay Deccan Chargers only to meekly surrender to Delhi Daredevils last night with another dismal batting display highlighted by continuing poor running between the wickets.

The Royal Challengers, led by Daniel Vettori, are also coming into the match with a defeat against Kolkata Knight Riders on Tuesday evening in Bangalore after an impressive victory over Delhi Daredevils in their first fixture.

The hosts have looked anything but champions with their famed batting line up consisting the likes of F Du Plessis, Murali Vijay, Suresh Raina, Ravindra Jadeja and Dhoni, coming a cropper so far.

In the matches against Mumbai and Delhi, the Super Kings have barely managed to cross the 100-mark and lost both by an identical eight wickets and playing before the home fans, Chennai would surely be under pressure.

After overcoming the rusty start with an impressive 74 runs victory over 2009 edition winners Deccan Chargers last week, Chennai dished out another below par show posting their second lowest IPL total of 110 against Delhi on Tuesday.

The match saw four of their batsmen getting run out after horrible mix-ups and Dhoni, who is also having a poor form, admitted they were not playing good cricket.

Chennai should strive to get full points in their second home tie tomorrow as this time they have better knowledge about the new turf at Chepauk, lack of which proved costly during their loss to Mumbai.

However, a lot would depend on Vijay, Raina and Dhoni finding their form. Prize catch of Chennai in the player auction, Ravindra Jadeja showed his class against Deccan when he hit a quickfire 48 and claimed career-best five for 16 and his role would also be crucial tomorrow.

In the spin department, ace off-spinner R Ashwin, who opened the attack against Deccan, also has not been able to pose any big challenge.

Royal Challengers, on the other hand, have their own set of problems especially after the way they capitulated against Kolkata Knight Riders and were restricted to 123 while chasing a challenging 165.

Explosive West Indies batsman Chris Gayle, who played a major part in taking the Bangalore outfit to the final last year, came a cropper yesterday but he will still hold the key to a big total.

South Africa’s AB de Villers, who scored 64 in their lung-opener against Delhi, will have to be consistent, while Virat Kohli too have to get over his single digit scores in the two matches so far.

Having played last evening, both the Chennai and Royal Challengers have preferred to skip to practice today, probably to take some rest for tomorrow’s tussle. (PTI)

Mongoose bat good for big hitting but not for defending, says Suresh Raina