Kings XI Punjab (KXIP) will aim to take revenge on Pune Warriors India (PWI) after the visitors defeated KXI) by 22 runs at Pune. 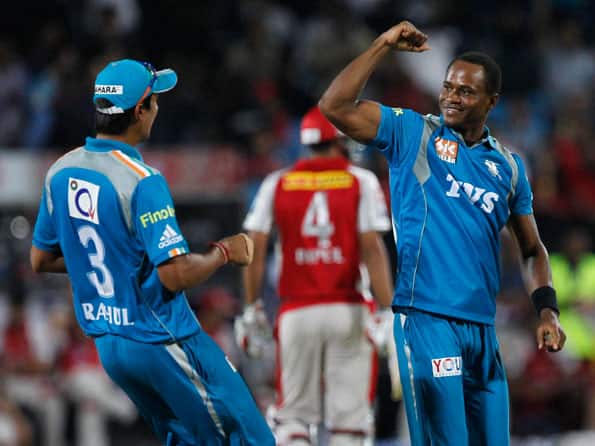 In their last match against the Pune Warriors India, Kings XI Punjab lost by 22 runs PTI

Kings XI Punjab (KXIP) will aim to take revenge on Pune Warriors India (PWI) after the visitors defeated KXIP by 22 runs at Pune.

This year and in some previous seasons as well, the Punjab side has failed to gain the initial momentum resulting in them not being able to go too far in the event, barring in the first season when, under Yuvraj Singh, they had reached the semifinals.

The outfit co-owned by Bollywood actress Preity Zinta would be without English pacer Stuart Broad, who has been ruled out due to a calf injury. His presence would have added some much-needed zing to the Kings XI bowling attack.

In their first encounter of IPL V, KXIP were blown away by Rajasthan Royals’ Ajinkya Rahane’s heroics who made 98.

KXIP could muster only 160 in response to the Jaipur team’s mammoth 191.

In this match too, Gilchrist (6) and (1) failed to give the team the desired start with both falling to run outs. It was spinner Bipul Sharma (35) who chipped in with some useful runs while some other batsmen including Mandeep Singh (24), Nayar (24) and David Hussey (18) were not able to play long innings.

In the middle-order, the responsibility will be on the shoulders of another Australian import David Hussey to guide the likes of Abhishek Nayar and Mandeep Singh.

Harmeet Singh has been bowling intelligently and Warriors need to watch out for him. Singh took three wickets in the last encounter against Pune.

Australian import James Faulkner with his left arm pace would also look to bother Sourav Ganguly’s men on Mohali’s bouncy track while English bowler Dimitri Mascarenhas too has the ability to contain the batsmen.

On the other hand, Ganguly’s side is riding high after an upset win over Mumbai Indians in their tournament-openerand will look to affirm their superiority over Kings XI. The Warriors defended a modest total of 129 against Mumbai, who could make just 101.

However, in that encounter, none of the Warriors batsman, except for man-of-the-match Steve Smith and Robin Uthappa, looked comfortable against the likes of Lasith Malinga and Pragyan Ojha.

The onus will be on the top-order to provide a good start to the Pune innings and Ganguly will look to play a big knock.

Kings XI will need to watch out for the likes of Ashok Dinda, who shaped Pune’s win with his four-wicket haul in the first match and gave away just 13 runs in three overs he bowled in the last match.