Both Royal Challengers Bangalore (RCB) and Rajasthan Royals (RR) will aim to get to their winning ways when they lock horns with each other in an Indian Premier League match. 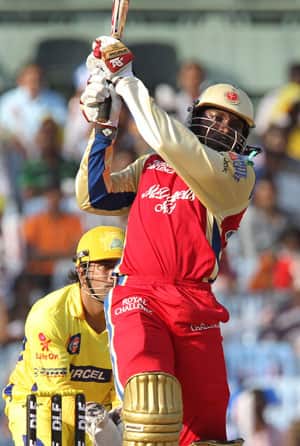 Royal Challengers Bangalore skipper Daniel Vettori would be relying on Chris Gayle, who scored a quickfire 68 off 35 balls against CSK at M Chidambaram stadium and would hope that the Gayle magic continues against Rajasthan Royals AFP

Both Royal Challengers Bangalore (RCB) and Rajasthan Royals (RR) will aim to get to their winning ways when they lock horns with each other in an Indian Premier League match.

After a win over Delhi Daredevils in their opening tie, the defeats against two-time champions Chennai Super Kings (CSK) and Kolkata Knight Riders (KKR) in the last two matches must have been an eye-opener for the Royal Challengers and it should spur them to produce an improved show.

Rajasthan, on the other hand, were off to a good start winning first two matches against Kings XI Punjab (KXIP) and Kolkata Knight Riders (KKR) on their home turf, but the loss in next two against Mumbai Indians (MI) and the Knight Riders have put them on the back foot and they would be keen to turn the tables.

RCB skipper Daniel Vettori, in the last two games, has come under attack from cricket experts for poorly marshalling his bowlers in crunch situation, especially for the penultimate over that he gave to Virat Kohli against Chennai, and Albie Morkel hit three sixes and two fours to snatch the game away from the Bangalorians.

Cricket legend Sunil Gavaskar said that the RCB should think hard about changing their captain and bring in Chris Gayle or Kohli to lead the side as they were in supreme form.

Hence, much is at stake for Vettori and he would want to silence his critics when his team takes on Rajasthan, whose performance on away turfs have been dismal so far.

The former New Zealand captain is also yet to contribute to the team with his bowling and it would be important for him to spin magic and inspire the rest. The Kiwi has taken just two wickets in the first three matches.

Vettori would be relying on Gayle, who scored a quickfire 68 off 35 balls against CSK at M Chidambaram stadium and would hope that the Gayle magic continues against Rajasthan.

However, RCB’s other batsmen haven’t fired so far and it is high time that the likes of Saurabh Tiwary and Cheteshwar Pujara get into the groove.

Kohli, who made paltry scores of eight and six in first two matches, came back strongly to smash 57 off 46 balls against CSK to help post 205. And the Delhi dasher would hope to continue the good work.

South African wicketkeeper-batsman AB de Villiers, who began his campaign with a strokeful unbeaten 64 against Delhi but failed to make contribution in the last two matches, would be eager to get back among runs.

The RCB have a strong bowling lineup, which can compliment with their strong batting. Veteran spinner Muttiah Muralitharan has kept up his scintillating form this season, providing RCB with crucial breakthroughs at crunch situations.

Pacer Zaheer Khan and R Vinay Kumar have also put in impressive performances and would look to continue with it.

Meanwhile, after two successive defeats outside home, Rajasthan would also aim to turn things around against the hosts and skipper Rahul Dravid would be making good use of his rich experience of playing on his hometown wicket.

However, bowling is still a concern for Rajasthan who would play their third encounter away from home.

Against Mumbai Indians, the bowlers were at the receiving end of Kieron Pollard.

Their bowling lacks experience and they could only hope that the bowlers stick to the task the way they did against the Knight Riders in the first-leg while defending 164.