Hello and welcome to CricketCountry’s live blog of the one-off One-Day International (ODI) between Ireland and Australia.

Hello and welcome to CricketCountry’s live blog of the one-off One-Day International (ODI) between Ireland and Australia at the Civil Service Cricket Club in Stormont, Belfast on Thursday. This is Rishad D’Souza, and I will be bringing you the live cricket scores and live cricket updates of the match. The Australians will be playing their first ODI match since their famous win in the final of the ICC Cricket World Cup 2015, which they won in their backyard at Melbourne. On the other hand, the last time Ireland were seen in action was in the ICC World T20 qualifier held in their backyard. Catch live cricket scores and updates of the one-off ODI between Ireland and Australia at Belfast here

Live Cricket Score Ireland 157 | Overs 23.4 | Target: 181 in 24 overs BATSMEN: Tim Murtagh 2(2): It’s all over for Ireland, they lost wickets in a cluster at the back end. Something strange happened in the penultimate over bowled by Mitchell Starc. He bowled a full toss which met the batsman well over waist height, but the umpire didn’t rule it a no ball. Nevertheless, Australia were a tad too good for Ireland in the end. The Irish showed a tough fight but fell short in the end by 23 runs (D/L method).

Live Cricket Score Ireland 137/7 | Overs 20 | Target: 181 in 24 overs BATSMEN: Stuart Thompson 17 (7): The Irishmen have not conceded defeat despite the dismissals of Ed Joyce, Niall O’Brien and Andy Balbirnie. Stuart Thompson is keeping the runs coming and smashed a couple of sixes in the 19th over to keep Ireland well in contention. In the 20th over, Cummins dismissed Wilson with a short ball. John Mooney was run out later in the same over. Match has swung back in Australia’s favour.

Live Cricket Score Ireland 60/2 | Overs 11 | Target: 181 in 24 overs BATSMEN: Ed Joyce 28 (23), Niall O’Brien 26 (34): After yet another rain interruption, Ireland’s target was reduced to 181 with the loss of three more overs which takes that figure to 24. Ed Joyce and Niall O’Brien really well and have the target in sight but will have to continue this way. One wicket and Ireland may wither away in this chase.

Live Cricket Score Ireland 7/1 | Overs 1 | BATSMEN: Ed Joyce 2 (1), Paul Stirling 0(0): As per the DLS system Ireland have to chase a revised target of 195 from 27 overs. Ireland are off to a horrible start after Mitchell Starc bowled the classic yorker to dismiss William orterfield in the fifth ball of the first over. Ed Joyce has walked out to accompany Stirling at the crease. OUT! William Porterfield 4 (5) b Mitchell Starc

Live Cricket Score Australia 222/6 | Overs 40.2 | BATSMEN: Matthew Wade 2 (2), Shane Watson 26 (25): Rain has returned to once again ruin the flow of play. Sources near the ground say the rain is very heavy and this could be quite a long break. Ireland will be happy with how they have performed and will be hoping to seal a famous victory is weather permits. They still have a long way to go considering Australia has the likes of Mitchell Starc in the bowling department. Earlier, John Mooney got rid of Mitchell Marsh with the latter holing out to long off for 11 runs. OUT! M Marsh 11 (15) c Murtagh b Mooney

Live Cricket Score Australia 190/5 | Overs 36 | BATSMEN: Mitchell Marsh 0 (4), Shane Watson 7 (12): Ireland are well and truly in this game now as Thompson gets rid of Steven Smith for 21. Bowled a line outside off stump and got some movement off the pitch, Smith tried to run it down to third man but got the edge. O’Brien took a sharp catch. Australia in big trouble OUT! Steven Smith 21 (38) c O’Brien b Stuart Thompson

Live Cricket Score Australia 173/4 | Overs 31.3 | BATSMEN: Steven Smith 10 (22), Shane Watson 1 (5): The momentum was steadily shifting towards Ireland but the rain has come to play spoilsport. Ireland will be keen to get back to action as soon as possible. After getting dominated by the openers, they have come back brilliantly. In the 31st over, McBrine got rid of Maxwell for 2. The ball was a quicker one outside off with no turn, but Maxwell played a lazy shot trying to punch it through off, got an edge and O’Brien took a good catch behind. Australia certainly in trouble. OUT! Glenn Maxwell 2 (6) c O’Brien b McBrine

Live Cricket Score Australia 168/3 | Overs 30 | BATSMEN: Steven Smith 8 (20), Glenn Maxwell 0 (4): Lovely bowling by Tim Murtagh! He got rid of George Bailey in the second ball off the 30th over. He bowled it on a good length on the fourth stump line and got it to nip in and Bailey was clueless, he edged it onto his stumps. He then bowled a testing four balls to a stiff Glenn Maxwell beating his outside edge thrice. OUT! George Bailey 1 (7) b Murtagh

Live Cricket Score Australia 165/2 | Overs 28 | BATSMEN: Steven Smith 7 (17), George Bailey 0 (2): The Irishmen are bowling really well at the moment. After the early onslaught they have recovered marvelously well. Murtagh has struck to get rid of Warner off a short ball. Warner tried to pull him for six pover midwicket, but mistimed and found the fielder there. OUT! David Warner 84 (80) c Joyce b Murtagh

Live Cricket Score Australia 145/1 | Overs 22 | BATSMEN: Steven Smith 0 (0), David Warner 72 (63): Ireland have finally made a much deserved breakthrough. And it’s Craig Young who does the trick again. Umpires again check for a no ball but it’s out this time. His celebrations were short-lived as Warner smashed a six next ball. OUT! Joe Burns 69 (70) c O’Brien b Young

Live Cricket Score Australia 122/0 | Overs 19 | BATSMEN: Joe Burns 63 (62), David Warner 56 (53): Not much going Ireland’s way. David Warner earlier was ruled not out when he seemed plumb and now Burns was saved by a no ball off Craig Young. Young was distraught after the third umpire called it a no ball. Ireland have to retain their calm.

Live Cricket Score Australia 114/0 | Overs 17 | BATSMEN: Joe Burns 60 (54), David Warner 52 (48): Both Aussie openers have registered half centuries and the partnership is ballooned to off 17 overs. Ireland need a breakthrough. They could have got one while Warner was on 45 when Stuart Thompson struck him in front but the umpire ruled it not out.

Live Cricket Score Australia 89/0 | Overs 13 | BATSMEN: Joe Burns 42 (36), David Warner 45 (38): Australia are cruising forward untroubled at the moment. The run rate is well above seven and the opening partnership between David Warner and Joe Burns is yet to come undone. Ireland need a breakthrough. The absence of George Dockrell is not helping their cause.

Live Cricket Score Australia 52/0 | Overs 7 | BATSMEN: Joe Burns 31 (20), David Warner 20 (22): Australia were a little tentative in the first couple of overs but Ireland failed to make a breakthrough. Both Joe Burns and David Warner seem to be having it really easy now. Ireland seamers over did the short ball without much pace to back it up.

Toss: Australia (Bat), the rain delay has caused the match to be truncated to a 47-over a side affair.

Following an inspection from the umpires, it has come to be known that the outfield is still damp and are scheduled for another inspection at 4.25pm (IST).

JUST IN: Covers are being removed and the umpires are soon to have an inspection at 3.30pm (IST).

Toss delayed due to rain. Super soppers are out as the groundsmen are trying hard to make the outfield dry.

The Australians will be starting afresh under the new captain in Steven Smith, as Michael Clarke had retired after the end of the 2015 Cricket World Cup. Clarke had announced retirement from the ODI cricket back then and the end of the Ashes 2015 saw the cricketer calling it a day from international cricket.

It will be a perfect opportunity for Ireland to make most of the chance they have got. Australia are coming off the Ashes 2015 defeat and are very low on confidence. Ireland have been playing really well in their backyard and it will be a massive challenge for them.

Australia will be taking on Ireland in one-off ODI. They will be travelling back to England as they will take on the Ashes winners in five ODIs and a T20I clash.

Virat Kohli shows how to win the hearts of his fans 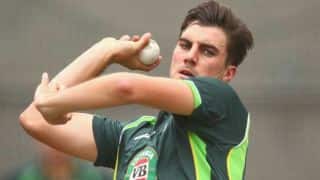 Pat Cummins: I'm 100 per cent confident for match against Ireland