Good Afternoon! Hello and Welcome to CricketCountry’s live coverage of the Group A Round 1, Match 13 of the ICC World T20 2016 between Netherlands and Ireland at the Himachal Pradesh Cricket Association (HPCA) Stadium in Dharamsala on Sunday. We will be bringing you all the live updates from this action. Netherlands and Ireland have been ousted from the tournament due to rains washing away the game. Ireland and Netherlands have faced each other five times in a Twenty20 international match in the past. Of these five encounters, both the teams have won two games each while one match did not fetch any result. This was the first T20I that they played against each other, way back in 2008. Ireland won the next two T20Is played in 2010 and 12. Netherlands then won the next two matches played in 2014 and 15. LIVE CRICKET SCORECARD: Netherlands vs Ireland, ICC World T20 2016, Match 13 at Dharamsala

Live Cricket Score, Ireland 47/6  | 6 overs (6) | TARGET 60|  BATTING: Niall O’ Brien 4 (8), Andy McBrine 1 (1): Paul Van Meerken to bowl the final over. TWO! Sorensen smashes the ball to long on. TWO MORE! This is not going to win Ireland the match. They need a couple of boundaries in the next two balls. OUT! Sorensen is bowled after he misses a wild swing. BOWLED HIM! Meerken is on a hat-trick again and cleans up Dockrell off his very first delivery. ONE! McBrine survives the hat-trick ball and gets a single. Last ball now and Van Meerken bowls a no ball. But no damage, as O’ Brien takes a single. OUT! Max Sorensen b Van Meerken 9 (7), George Dockrell b van Meerken 0 (1)

Live Cricket Score, Ireland 40/5  | 5 overs (6) | TARGET 60|  BATTING: Niall O’ Brien 3 (6), Max Sorensen 5 (4): Mudassar Bukhari now. ONE! Sorensen smashes the ball back to Bukhari, but hits Bukhari on the shin. DOT! O’Brien plays and misses. ONE! Bukhari cramps the batsman for room yet the batsmen run through for a single. TWO! Sorensen agains gets hit on the shin, but the ball ricochets and the batsmen run two. ONE! Hit to long on. Ireland losing the plot here. DOTto finish, just five off it.

Live Cricket Score, Ireland 35/5  | 4 overs (6) | TARGET 60|  BATTING: Niall O’ Brien 2 (3), Max Sorensen 1 (1): Roelef Van der Merwe now. After a dot ball off his first over, he immediately dismisses Wilson, while he was attempting to reverse sweep. The catch is taken at short third man. Andrew Poynter is the new batsman. OUT! Poynter is dismissed looking to clear the long on fielder, but the catch is taken well short of the fence. Van der Merwe too misses out on a hat-trick and Max Sorensen is the new batsman. OUT! Gary Wilson c Van der Gugten b Van der Merwe 4 (4), Andrew Poynter c B Cooper b Van der Merwe 0 (1)

Live Cricket Score, Ireland 28/1  | 2 overs (6) | TARGET 60|  BATTING:  Paul Stirling 15 (6), Kevin O’Brien 0 (0): Van Gugten is the new bowler. SIX! Stirling just uses the ace of the bowler and smashes the ball over the backward leg fence. THREE! Stirling mistimes the ball and some good running fetches them three runs. OUT! Porterfield looks to clear the in field, but holes out to mid on. First bow for Ireland. Kevin O’ Brien is the new batsman. ONE BYE! Stirling runs through after missing the ball. WIDE! Bowler strays down leg and pooer keeping gives Ireland another run. SIX! Stirling dismisses the ball over the deep square leg fence once again.  OUT! William Porterfield c B Cooper b Van der Gugetn

Live Cricket Score, Ireland 10/0  | 1 over (6) | TARGET 60|  BATTING: William Porterfield 5 (5), Paul Stirling 0 (1): We are underway and Ireland need 10 an over to win the match. This is a dead rubber as both of them are out of contention of making it to the Super 10 match. FOUR! Porterfield is away with a boundary on fine leg. DOT! Porterfield then hits the ball straight to mid on. FOUR BYES! Porterfield goes for a big heave but it misses him and the wicketkeeper. DOT! Porterfield is beaten. ONE! Porterfield mistimes it to the mid off fielder. ONE! Hits Stirling on the pads and the batsmen scamper through for a single.

Live Cricket Score, Netherlands 59/5 in 6 overs | BATTING: Mudassar Bukhari 0 (0): Last over and first ball for boundary by Myburgh. Rankin is bowling the last over. Another brilliant four by Myburgh. They it is just 6 overs match and making most of it. This over has gone 4-0-4-0 so far. Already from 4 balls. Yes review taken and out goes Myburgh. Superb innings from Myburgh 27 from 18 balls. Last ball left what will happen here, six or four or dot or another wicket? Mudassar Bukhari comes in the non strikers end. Borren runs for second and another wicket of Borren. OUT! Borren run out 14 , OUT! Myburgh run out 27

Live Cricket Score, Netherlands 50/3 in 5 overs | BATTING: Stephan Myburgh 19 (13), Peter Borren 13 (8): Kevin O’Brien playing his 51st match and Borren goes for boundary. Myburgh on strike now and goes for a boundary but fielder on the deep. Two quick runs from third ball. Good bowling yorker from 4th ball of second last over. 7 balls remaining to play. Superb Borren boundary. And 50 up for Netherlands.

Live Cricket Score, Netherlands 38/3 in 4 overs | BATTING: Stephan Myburgh 16 (11), Peter Borren 4 (4): Another wicket down stumped on time by Niall O’Brien and once again by Dockrell. Netherlands captain comes to bat Peter Borren. Myburgh still going strong. 4 balls to go. The captain goes off the mark with a boundary. The bowl turning and spinning perfectly. Shout but no luck with wicket this time. One ball to go to complete the 4th over. OUT! W Barresi st †NJ O’Brien b Dockrell 8

Live Cricket Score, Netherlands 33/2 in 3 overs | BATTING: Stephan Myburgh 20 (11), Wesley Barresi 8 (3): Wickets missed out by Irish people, this time by Myburgh. But Barresi goes for a big one and SIX! McBrine is the next bowler and wide in the next move with a single. Superb boundary now. This is required in every over by Netherlands. No stopping Myburgh in whatever conditions. Inside leg stump another boundary to end the over.

Live Cricket Score, Netherlands 13/2 in 2 overs | BATTING: Stephan Myburgh 9 (7), Wesley Barresi 1 (1): Dockrell is the next bowler under attack and Cooper goes and full toss gets the wicket. He goes for a duck. The captain makes way and Van der Merwe comes to bat and misses the wicket, limping to get the wicket. This time now mistake another wicket down for Netherlands. Wesley Barresi comes to bat next. OUT! van der Merwe c Murtagh b Dockrell 2, OUT! Tom Cooper c Rankin b Dockrell 0

Live Cricket Score, Netherlands 9/0 in 1 overs | BATTING: Stephan Myburgh 9 (6), Tom Cooper 0 (0): Tim Murtagh opens the attack for Netherlands and pitch is acting up rains. Stephan Myburgh on strike while Tom Cooper on the other side. Good leg side and three dot balls from 6 over match. Is this enough for Netherlands. Goes for long on and one bounce comfortable boundary. Slams it over for four more, Myburgh taking the control. Last ball to go and a single to end it.

Inspection done and here you go it will 6 overs match each side! This will be interesting!

10 Mins more and the match might happen 5 overs each for both sides!

Weather continues to be really poor in Dharamsala, in need of a rapid change to get play in #IRE v #NET soon#WT20 pic.twitter.com/PyBNd69KX5

If the rain gods do not stop supply of rain until 16:48, the match will be called off!

Covers have come over again, looks like this game will take sometime to begin. Keep you posted for further updates.

Ireland have won the toss and elected to bowl first

A closer look at their recent games, Netherlands had one win and a loss  against UAE and Scotland respectively; the matches were played in February this year. Ireland’s last T20I series was against UAE. It was a two-match series with both the matches played at Abu Dhabi. Ireland won the first fixture by 34 runs.Netherlands on the started their campaign against the Group A favorites Bangladesh. Despite a collapse in the batting-order, opener Tamim Iqbal played a classy innings of 83 off 58 balls which led them to a total of 153. Netherlands bowler Timm van der Gugten bagged 3 wickets while Paul van Meekeren got 2. The chase went completely in Bangladesh’s favor as their bowlers went on to pick up wickets in and did not let them build a partnership. Netherlands finished at 145 for 7 after their 20 overs. 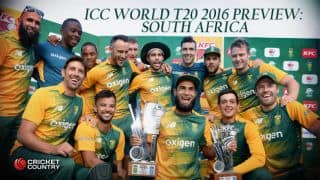