Catch all the live updates of the 1st T20I between Ireland and Scotland here.

(Will Ireland use home advantage to draw first blood or will Scotland spring a surprise? Catch live cricket scores and updates of the first T20I at Bready here)

It was a fantastic day of cricket at Bready. Do join us for the second T20I at the same venue on Friday. Till then, we wish you good night!

And Scotland have pulled off an easy six-wicket win here at Bready, with Wallace hitting the winning boundary for the Scots! It was mostly a breeze of a chase for the visitors, barring the freak over by Tyrone Kane in which he took three wickets in the first five balls of his international career! He could not however, carry the momentum on for long as the, conceding 21 runs without taking a wicket in his next couple of overs. Berrington and Wallace added a quickfire 56-run unbeaten stand for the fifth wicket to guide their team home!

Scotland are breezing away towards the target now. The visitors have added 45 runs in the last five overs without losing a wicket. While Kyle Coetzer is batting at a run-a-ball 19, Matthew Cross has already raced to a half-century. Scotland need another 58 to win from 60 balls now, which shouldn’t be much of a trouble for Cross and Coetzer.

Scotland are off to a flying start! While George Munsey has been dismissed for a 10-ball 12 after scoring a couple of boundaries, Matthew Cross and Kyle Coetzer have been brutal in their approach as Scotland are scoring at a rate of nearly nine runs per over.

The Ireland middle order rallies together to guide their side to a competitive score of 146 for the loss of five wickets at the end of their allotted overs. While Kevin O’Brien remains the top-scorer with a 19-ball 30 that included four boundaries and a six, Stuart Thompson and Max Sorensen’s 42-run stand too came in handy for the hosts. Michael Leask remains the pick among the Scottish bowlers with figures of 2 for 23.

Ireland have begun to increase their scoring rate in the last five overs, including a few big hits from Kevin O’Brien. Meanwhile, the hosts lose the wicket of David Rankin, who is bowled by Leask for 34 off 37 balls.

Safyaan Sharif’s twin strikes has left Ireland in a world of trouble. And to make matters worse Michael Leask has gotten rid Andrew Poynter for just 7. Ireland are in big trouble and Scotland look well set to restrict Ireland to less than 130.

Ireland were looking for an aggressive start but instead have lost a wicket in the very first over in the form of Stuart Poynter. The wicket will at least temporarily put the pressure on Ireland. Debutant David Rankin and John Anderson must look to put up a steadying partnership.

TOSS UPDATE: Ireland have won the toss and elected to bat first

Hello and welcome to CricketCountry s live cricket blog of the first T20I of the three-match series between Ireland and Scotland, at Bready. This is Amit Banerjee, and I will be bringing you the live updates and live cricket scores of the match.

Ireland and Scotland will face off in the first T20 International at Bready. Ireland will enter the match as marginal favourites. Playing at home will also boost their advantage by a little. Ireland will be lead by William Porterfield, while Preston Mommsen will be at the helm for the Scots.

This three match series is of major significance to both sides, since it will provide for vital match practice ahead of the ICC World T20 Qualifiers 2015 a tournament which will determine which side makes it to the ICC World T20 2016, scheduled to be held in India. 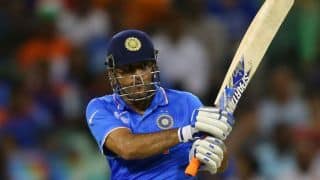