Welcome to CricketCountry’s live coverage of the Ranji Trophy 2015-16, Group B match between Jammu and Kashmir and Goa at Jammu.

Hello and welcome to CricketCountry’s live coverage of the Ranji Trophy 2015-16, Group B match between Jammu and Kashmir and Goa at the Gandhi Memorial Science College Ground in Jammu. Both the teams are currently placed sixth and seventh in the points table respectively. Goa are currently placed in the sixth spot as they have 15 points from seven games, along with a win and loss, each followed by five draws. Jammu and Kashmir, on the other hand, have played six games and have just eigth points from a couple of losses and four draws, as they are in a despearte search for their opening win this season so far. Ranji Trophy 2015-16, complete coverage

LIVE CRICKET SCORE: GOA 199/0, BATTING: Amogh Desai 94 (204), Sagun Kamat 27 (95) — What else can we say, they just keep batting as the innings goes on and on and on, while the J&K bowlers continue to struggle and get the opening breaktgrough.

LIVE CRICKET SCORE: GOA 145/0, BATTING: Amogh Desai 65 (138), Sagun Kamat 5 (27) — No special develpoment or turns in the game as the same story of Goa batsmen dominating J&K bowlers continue throughout, while Swapnil A Asnodkar is retired hurt on 62.

LIVE CRICKET SCORE: GOA 113/0, BATTING: Amogh Desai 38 (62), Swapnil A Asnodkar 38 (64) — LUNCH!!!! Goa are absoulutely in command as they have not lost any wicket and move into the lunch break on totoal command of their innings.

LIVE CRICKET SCORE: GOA 35/0, BATTING: Amogh Desai 23 (32), Swapnil A Asnodkar 12 (14) — Slow start by Goa, but a fair one as the batsmen look to bat comfortably initially and avoid early hiccups to their innings.

In the previous game, Ian Dev Singh Chauhan (126) struck a fighting century, his ninth in first class, and Mithun Manhas (50 not out) scored his second fifty in a row to help Jammu and Kashmir salvage a draw against Jharkhand in their Ranji Trophy Group C match. At the top, Shubham Khajuria also scored a valiant 77, helping the side’s cause, following on. J&K batsmen batted with lot of resolve to get at least one point from the contest after conceding a huge first innings lead.

They ended their second innings at 265 for four, losing only two wickets in the final day. Ian Dev Singh Chauhan’s 126 came off 177 balls with 21 fours and two shots over the fence. While S Sandeep Warrier returned a rich match-haul of nine wickets to help Kerala post an innings and 83 runs win over Goa and earn a bonus point on the penultimate day of their Ranji Trophy Group C cricket match on Monday, reported PTI.

TOSS: Jammu and Kashmir have won the toss and elected to field against Goa in this Group C match at Jammu. 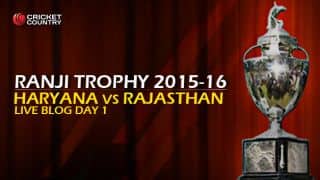 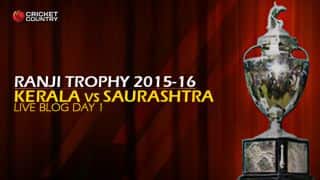