Jammu & Kashmir will look to get off to a good start once again.

Hello and welcome to CricketCountry’s coverage of the first round of matches in the Ranji Trophy 2015-16 season as Jammu & Kashmir (J & K) take on Kerala in a Group C fixture at Sher-i-Kashmir Stadium at Srinagar. J  & K got off to a magnificent start in the previous season, defeating Mumbai in the very first game of their campaign. They would hope to start this campaign off on a similar note. Sanju Samosn will be one of Kerala’s key players this time and has also been entrusted to lead the side this time. They too have quite a few important players like Sachin Baby, Nizar Niyas etc. Kerala has produced a few Indian players like S Sreesanth and Tinu Youhannan to name a few. READ: Ranji Trophy 2015-16: Sanju Samson’s litmus Test as Kerala captain

Live cricket score Jammu & Kashmir 183/6 | Overs 65| BATTING: Parvez Rasool 54 (75), Bandeep Singh 23(101): Looks like Bandeep Singh wants to play one of the slowest innings of this Ranji Trophy. He is batting on 23 having faced 101 balls. Parvez Rasool is giving his company and he’s is batting on 54. Bandeep Singh has scored 16 runs (out of his total 23 runs) so far through boundaries, thus we can just imagine the number of dot balls he has played but Bandeep Singh’s slow batting is needed to give Rasool help at the other end.

Live cricket score Jammu & Kashmir 177/6 | Overs 58| BATTING: Parvez Rasool 54 (73), Bandeep Singh 20(79):
Rasool is batting nicely on 54. Let’s hope that his contribution with the bat will charge him up to bowl better later on. Rasool is also batting quickly and has faced just 73 balls. J&K will be hoping that the partnership continues till they reach 200.

Live cricket score Jammu & Kashmir 97/4 | Overs 38| BATTING: Parvez Rasool 6 (17), Bandeep Singh 0(15):
Chauhan was not able to convert his start into a big score, he perished on 38. Manhas was caught by Sachin Baby of Farzeen’s ball. Local boy Parvez Rasool who has also played in an ODI for India is on the crease with Bandeep Singh. They have a hard task ahead.

Live cricket score Jammu & Kashmir 61/2 | Overs 26| BATTING: Ian Chauhan 28 (54), Mithun Manhas 0(6): Chauhan is batting well on 28, he needs to score big if J&K wish to post a competitive total. Adil Reshi was bowled by Vincent Gomez. At present the match is in balance.

KN Ananthapadmanabhan, the greatest cricketer in the history of the state, was unfortunate to have an overlap with the career of Anil Kumble. Krishna Chandran Karate, who played for UAE in ICC Cricket World Cup 2015, also hails from Kerala. In Ranji Trophy 2014-15 Kerala were not at their best and won only a solitary game against Services and had as many as six draws. Their sole loss came against rivals Andhra. 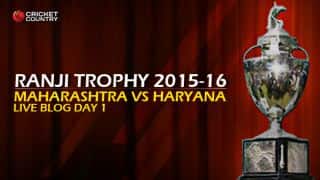