Hello and welcome to CricketCountry’s coverage of the first round of matches in the Ranji Trophy 2015-16 season as Jammu & Kashmir (J & K) take on Kerala in Day Two of a Group C fixture at Sher-i-Kashmir Stadium at Srinagar. At the end of Day One, Jammu and Kashmir were  precariously placed at 247 for seven. Kerala will be quite content with what they achieved on Day One, but given the unpredictable nature of Ranji Trophy pitches, one can never say what a good score is. READ: Ranji Trophy 2015-16: Sanju Samson’s litmus Test as Kerala captain

Jammu & Kashmir would have been in a far worse situations had it not been for steadying fifties by Parvez Rasool and Bandeep Singh. Bandeep went to stumps at an unbeaten fifty, while Rasool lost his wicket to MD Nidheesh. Bandeep will look to add as far as possible with the tail on Day Two to take J & K to a more respectable total. Waseem Raza played a gritty unbeaten 26 at the end of the day to give J&K hoppe fo a better score.

For Kerala the key will be to wrap up the innings quickly and get themselves into bat. Sanju Samson, who is captain and has played with India A sides, must take the mantle to lead his side from the front once they get in to bat. Nidheesh, Ahmed Farzeen and Raiphi Gomez pickd two wickets each while the other wicket was taken by KS Monish.

OUT! Jagadeesh run out Ram Dayal

Live cricket score Kerala 103/1 | Overs 59.1| BATTING: Jagadeesh 50(128), Rohan Prem 40(115):
Kerala are looking good but still have a long way to go. Jagadeesh has just made his fifty. He is batting along with Prem. Both the batters are batting sensibly after Kerala lost their first wicket Kodoth for just six runs.

Live cricket score Kerala 74/1 | Overs 29| BATTING: Jagadeesh 35(85), Rohan Prem 28(83): Jagadeesh and Prem are looking good. Kerala needs this partnership to go since they are chasing a hefty first innings score of 330. Prem has also hit a six in his knock so far.

Live cricket score Kerala 29/1 | Overs 14| BATTING: Jagadeesh 15(26), Rohan Prem 7(40):
J&K has taken its first wicket dismissing opener Kodoth cheaply. Jagadeesh and Prem are on the crease and are batting with sincerity and patience. 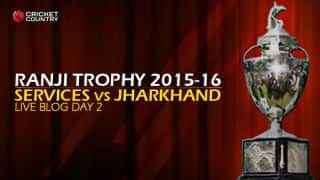