Catch Live Updates of Day One of action of the Ranji Trophy 2015-16 clash between Himachal and Jharkhand at Ranchi Stadium.

Hello and welcome to CricketCountry’s live coverage on Day One of the Ranji Trophy 2015-16 game between Jharkhand and Himachal. The Group C teams have both done quite well, both having taken two outright wins in their six games. However Himachal is above Jharkhand on the points table owing to the fact that their remaining four games have all been draws. Jharkhand have however lost two and drawn other two. At present Himachal have 24 points while Jharkhand have 17. Evidently a win is more crucial for Jharkhand at this stage. A defeat can crush their hopes for a promotion.

LIVE CRICKET SCORE: JHR 306/4, BATTING: Ishank Jaggi 43 (66), Kumar Deobrat 5 (21) — STUMPS!!!! Jharkhand finish the day on top as they cross the 300-run mark, however losing four wickets instead. Nevertheless, they won’t mind much as they aim for 200 more runs before giving a declare unless HP bowlers come up with something extra-ordinary.

LIVE CRICKET SCORE: JHR 195/2, BATTING: SP Gautam 79 (187), Saurabh Tiwary 68 (126) — No harm done to the Jharkhand innings as the same story continues, with both the batsmen batting comfortably as Saurabh Tiwary brings up his half-century.

LIVE CRICKET SCORE: JHR 168/2, BATTING: SP Gautam 71 (152), Anand Singh 48 (103) — Steady start by the Jharkhand batsmen in the post-lunch session as they have not suffered any further setback and continue to bat with ease.

TOSS: Jharkhand have won the toss and they will be batting first against Himachal Pradesh in this Group C match at Ranchi.

Jharkhand had a fantastic outing in their previous game against the pathetic Tripura team winning by an innings and 67 runs. Himachal were playing arguably the strongest team in their previous game, Saurashtra, and secured a draw against them. However, their task was made easy by the absence of Cheteshwar Pujara and Ravindra Jadeja in the Saurashtra outfit as they were away on national duty.

Himachal scored 551 in the first innings of the previous game thanks to a 187 by Prashant Chopra and 101 by Robin Bist and bowled out Himachal for 437 in response, which gave them three points. Shahbaz Nadeem and Ishank Jaggi were the star performers for Jharkhand in their big win over Tripura. Nadeem took six wickets while Jaggi scored a hundred. Jharkhand will hope to inflict similar fate on Himachal but the odds of that are slim. Himachal have the better chance in the contest. 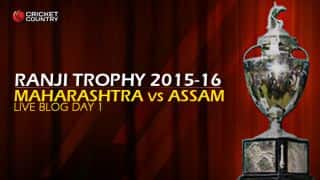 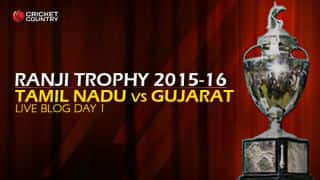