The likes of Robin Uthappa and Kedar Jadhav will be eying to resurrect their international careers.

Hello and welcome to CricketCountry’s live blog of the Irani Cup 2014-15 match between Karnataka, the champions of the Ranji Trophy and the Rest of India team.

TOSS: Rest of India (ROI) won the toss and elected to field against Karnataka in the Irani Cup 2014-15 match at the Chinnaswamy Stadium in Bangalore on Tuesday. Karnataka vs Rest Of India: Live Blog, Day 2

The Rest of India team will be captained by Bengal cricketer Manoj Tiwary. The likes of Robin Uthappa and Kedar Jadhav will be eying to resurrect their international careers, before embarking on high-octane Indian Premier League (IPL) contest, when Ranji Trophy champions Karnataka and Rest of India (ROI) lock horns in the Irani Cup, PTI reported.

Last season Jadhav was the highest scorer with 1,223 runs that helped Maharashtra reach to the final. But this year he cracked just one ton during his team’s semifinal journey. A solid knock against the Karnataka pace trio of Abhimanyu Mithun, R Vinay Kumar and Sreenath Aravind will boost Jadhav’s confidence and keep him in the selection fray. 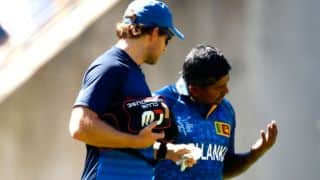