Posy Lunch session on Day 2: The scores are level. KL Rahul comes out to bat again after Abhimanyu Mithun has played a handy knock of 39.  Meanwhile Sachin Tendulkar is at the Wankhede now. He comes out to watch this exciting final.

Indrajith with leggies at one end. Aparajith with offies at the other. Tamil Nadu are bringing the term ‘spin twins’ alive. #RanjiFinals

If you want crowds at Wankhede for #RanjiFinals broadcast that Sachin is at the ground!! 😀 #RanjiTrophy

Karnataka start the day with 45/4 after 14 overs with K Nair & A Mithun on the Crease.They have big task at hand. @ranjiscores #RanjiTrophy

And what is the point of having Hindi commentary for a #RanjiTrophy final involving Karnataka & Tamil Nadu? @StarSportsIndia @BCCI

Hello and welcome to CricketCountry’s coverage of the Ranji Trophy 2014-15 final from Mumbai. I am Sandipan Banerjee and I will be bringing all the Day Two updates of the title clash of this season’s premier domestic tournament, Ranji Trophy.

Skipper Vinay Kumar took five for 34 as defending champions Karnataka skittled out Tamil Nadu for 134 on the opening day of the Ranji Trophy cricket tournament final, which saw 14 wickets tumble at the Wankhede stadium on Sunday. The holders wrapped up the Tamil Nadu first-innings in 62.4 overs, just 28 minutes after the tea session.

At stumps, Karnataka were struggling at 45 for four after 14 overs, trailing by 89 runs. Tamil Nadu batsmen started the innings with a cautious approach and kept consuming balls. Electing to field, Karnataka bowlers made the best use of the slightly green top wicket and made early inroads.

Vinay Kumar started the slide in the seventh over, when he trapped opener Murali Vijay leg before, leaving Tamil Nadu at 13 for one. He struck again two overs later to get rid off Baba Aparajith (1) with an inswinging delivery, which sneaked through the young batsman’s defences. Dinesh Karthik scored 11 off 20 balls but was unlucky to be given caught behind as the ball had grazed his chest, further reducing the side to 34 for three. Tamil Nadu kept losing wickets at regular intervals and the pressure kept mounting with the runs trickling in at a snail’s pace.

Things didn’t improve for Tamil Nadu as Vijay Shankar was plumb leg before to a Vinay Kumar delivery, leaving the side reeling at 49 for four. Resuming at 60 for four, Tamil Nadu lost the rest of the side for just 74 runs. 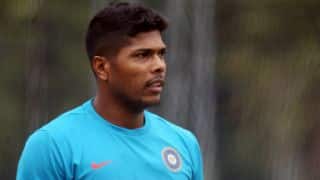