Catch live updates of the title clash of Ranji Trophy 2014-15 between Karnataka and Tamil Nadu.

Hello and welcome to CricketCountry’s coverage of the Ranji Trophy 2014-15 final between Karnataka and Tamil Nadu from Mumbai. I am Sandipan Banerjee and I will be bringing all the Day four updates of the title clash of this season’s premier domestic tournament, Ranji Trophy.

Nair, who scored his first triple century in first class cricket, piled on 123 runs with K L Rahul in the first session, reaching his 200 just three balls before lunch. Incidentally, this was Nair’s first double century. Batting for two full days, Nair struck 45 fours and a six in his marathon 815 minute knock and reached his 300 with a reverse sweep boundary off Malolan Rangarajan. READ: Sachin Tendulkar visits Wankhede stadium during Ranji Trophy 2014-15 final

The youngster is nine runs shy of equalising Gul Mohammad’s record of 319 for Baroda against Holkar in 1946-47, for the highest score in a Ranji final. Resuming at an overnight score of 323 for 5, the Karnataka batsmen continued where he left off and ensured that there were no casualties till lunch. READ: Ranji Trophy 2014-15 final: Vinay Kuma’s five-for skittles out Tamil-Nadu for 134

Nair took the charge for the holders as he crafted the triple century after resuming on his score of 130. He looked poised for a big score and the intent of Karnataka was clear that they wanted to set a daunting total. The 23-year old surpassed Gundappa Vishwanath’s 247 against Uttar Pradesh in 1977-78, for the highest runs scored by a Karnataka batsman in the Ranji final, PTI reported. 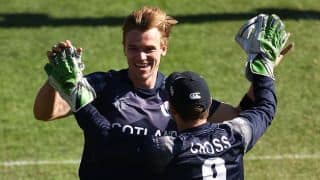 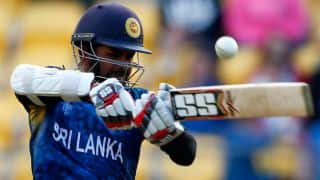