Prasanth Parameswaran won’t be batting, So its decided. KARNATAKA WIN RANJI TROPHY 2014-15, and became the second most successful team in the history of Ranji Trophy after Mumbai with eight championship titles. READ: Match Report

Karnataka win the #RanjiTrophy with help from our #Royal triple centurion, Karun Nair! He was named Man of the Match for his 328 run knock! — Rajasthan Royals (@rajasthanroyals) March 12, 2015

Vinay Kumar: I’d like to thank all the players, they worked hard to achieve this milestone. I am very happy with my performance #RanjiTrophy

Hello and welcome to CricketCountry’s coverage of the Ranji Trophy 2014-15 final between Karnataka and Tamil Nadu from Mumbai. I am Sandipan Banerjee and I will be bringing all the Day five updates of the title clash of this season’s premier domestic tournament, Ranji Trophy.

Tamil Nadu were rocked back in their second innings too, as they were reduced to 113 for three after conceding a 628-run first innings lead to Karnataka at the end of the fourth day’s play in the Ranji Trophy final at the Wankhede Stadium, IANS reported.

Earlier in the day, Karnataka added to their overnight score of 618 for seven, with right-hand middle-order batsman Karun Nair finally finishing on an individual score of 328 runs — the highest in a Ranji Trophy final in the 92-year history of the country’s premier domestic cricket tournament.

Nair, 23, went past Baroda batsman Gul Mohammad’s 319 made against Holkar in the 1946-47 season final. Skipper R. Vinay Kumar also scored a ton (105) to ensure they amassed a monumental total of 762 all out. Later in the day, leg spinning all-rounder Shreyas Gopal pegged back the Tamil Nadu batting, picking up figures of 2/36 as he cleaned up opener Abhinav Mukund (13) and Baba Indrajith (18). Vinay took the other wicket that of India Test opener Murali Vijay (27). 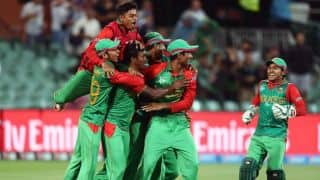