Welcome to CricketCountry’s live coverage of the Daay 3 of the Ranji Trophy 2015-16 Group C match between Kerala and Himachal Pradesh in Malappuram.

Live Cricket Score: Himachal Pradesh 24/4 | Overs 4.3|TARGET 24|  BATSMEN: Ankit Kalsi 10 (10), Nikhil Gangta 0 (0): HP pull off a win but Kerala did give them some fight. Monish picked up 4 wickets withoug conceding a single run. A target close to 100 might have seen Kerala pull off a win.

Himachal Pradesh were all out for 163 after bundling out hosts Kerala for 103 in their Group C Ranji Trophy cricket match here to day. Opting to bat, Kerala were off to a disastrous start and kept losing wickets at regular intervals at the Perintalmanna Cricket Stadium. Left-arm spinner Rahul Singh returned impressive figures of six for 19 for the visitors. Himachal, too, struggled despite a better start. In the end the visitors were all out in 37.5 overs, but managed to take a first-innings lead of 60 runs. K Mohnish (3/60) and Fabid Ahmed (3/12) were the most successful bowlers for Kerala, reports PTI. 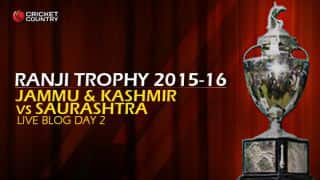