Catch live updates of Day One of match between Kerala and Jharkhand here.

Hello and welcome to CricketCountry’s live coverage of Day 1 of the Ranji Trophy 2015-16 Group C match between Kerala and Jharkhand. Kerala will lock horns with Jharkhand at Malappuram, Kerala today i.e. on October 15, 2015 in a Group C match. This is the third round of Ranji Trophy 2015-16. Kerala’s performance in their two matches of this series has been average— they drew both the matches and have six points with them. They are ranked fourth in Group C while Jharkhand is ranked eight i.e. four places down owing to their two terrible losses in this tournament. Due to their poor performance so far they have zero points as of now. They lost the match against Saurashtra by eight wickets. Thus it is clear that Kerala start this match as favourites; however they should not take Jharkhand lightly. Teams have been known to come back stronger in previous Ranji Trophies on some occasions after being down and out in their initial matches. Read all Ranji Trophy 2015-16 team previews here

Sanju Samson, Rohan Prem and VA Jagadeesh will be the key batters for Kerala. Both Jagadeesh and Prem have batted well in this tournament so far and they would be their prime batters to watch out for in this match too. For Kerala, Ishan Kishen and Rameez Nemat need to bat with responsibility and play their scoring shots on lose deliveries only unlike what they did in their first match of the tournament. They should not play reckless, extravagant shots and get out. Jharkhand will look to their captain Varun Aaron to take early wickets in Kerala’s innings and thus lead from the front but other bowlers should also support him and batters should bat sensibly and with discipline which is so much required in Test cricket.

Live cricket scores Jharkhand 164/7  | Overs 62| Batting: Varun Aaron 31(52), Saurabh Tiwary 53(118):  Saurabh Tiwary has come back to the middle after the loss of Jharkhand’s seventh wicket in the form of Shahbaz Nadeem. He has completed his fifty. On the other end Varun Aaron is batting on 31. So two set batters are at the crease right now and this is the perfect opportunity for them to seize the initiative of the match in their favour.

Live cricket scores Jharkhand 121/6  | Overs 49| Batting: Varun Aaron 6(14), Shahbaz Nadeem 1(4): Saurabh Tiwary got retired hurt when he was batting on 44. Jharkhand have lost four wickets in just 19 overs. Things looking difficult for them, they are in danger of getting all out on a score of under 200. At present their skipper Varun Aaron is on the crease. Both the batters need to be stubborn on not losing their wicket for the next fifty runs at least.

Live cricket scores Jharkhand 87/2  | Overs 31| Batting:  Prakash Munda 39(94), Saurabh Tiwary 44(90): Saurabh Tiwary is just six runs short of his fifty. Both the batters are batting with discipline and have taken Jharkhand out of the difficult situation in which they lost two wickets early on on the innings. Jharkhand fans will be hoping that both these batters complete their hundreds as well.

Toss: Kerala, who chose to field 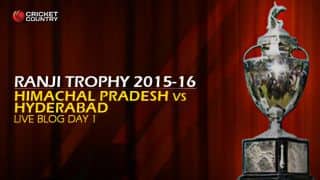