Catch live updates of Day Two of match between Kerala and Jharkhand here.

Hello and welcome to CricketCountry’s live coverage of Day Two of the Ranji Trophy 2015-16 Group C match between Kerala and Jharkhand. Going into Day Two Kerala will be the team with a tad more confidence then the Jharkhand side. Kerala skittled Jharkhand out for 202 with Sandeep Warrier taking four wickets while Rohan Prem and Karapambil Monish chipped in with two wickets each. Nizar Niyas and Raiphi Gomez got one wicket each. Jharkhand’s frailties with the bat were displayed yet again. Two batsmen got past the fifty-run mark including Prakash Munda and Saurabh Tiwari but they’re hard work on a tough pitch was undone by the three ducks in the innings. READ: Full coverage, Ranji Trophy 2015-16 here

Apart from the ducks there were five other single digit innings for Jharkhand. Apart from the half-centurions the only other innings worth mention was that by Varun Aaron which saw 37 runs added to the team total and ultimately helped Jharkhand surpass the 200-run mark. Aaron compounded his effort with the bat by making an early breakthrough by dismissing Akshay Kodoth.

Kerala went to stumps precariously placed at three runs for the loss of one wicket. If they want to secure the advantage, they’ll require better performances from the middle order. Their aim will be to wear out the Jharkhand bowlers before accelerating. Ultimately they would like to have a lead of at least 100 runs by the time their innings draws to a close.

Live cricket scores Jharkhand 47/2  | Overs 18 | Batting: Ishan Kishan 30(50), Saurabh Tiwary 1(23): Jharkhand are 47 for two by the end of second day. Saurabh Tiwary and Ishan Kishan are at the crease right now. If Jharkhand takes their score beyond 200 tomorrow they will be giving a heavy lead to the opposition and it will increase their chance of winning this match. Shahbaz Nadeem and Varun Aaron are yet to bat.

Live cricket scores Jharkhand 46/2  | Overs 17 | Batting: Ishan Kishan 30(48), Saurabh Tiwary 0(19): Jharkhand have played better cricket in this match than their last two encounters in this tournament. Ishan kishan is batting on 30, Saurabh tiwary has faced 19 balls and is yet to get off the mark.

Live cricket scores Kerala 148  | Overs 65.4 | Batting: Warrier 0(5): Kerala are bowled out for 148. Rohan Prem was their highest scorer with 52 runs. Varun Aaron took five wickets, he was also the most economical bowler giving just 1.38 runs per over on an average. They fell 54 runs short of equaling Kerala’s first innings total of 202.

Live cricket scores Kerala 145/8  | Overs 63 | Batting: Robert 11(34), Niyas Nizar 0(0): Kerala have lost four wickets in the last 21 overs. They are still trailing by 57 runs. Jharkhand have come out stronger in this match after playing poorly in their first two encounters of Ranji Trophy 2015-16. Varun Aaron has been bowling very well and has picked three wickets.

Live cricket scores Kerala 116/4  | Overs 44 | Batting: Rohan Prem 42(67), Sachin Baby 2(12): Jagadeesh gets out on Varun Aaron’s bowling. He struck four boundaries in his knock of 44. Sachin Baby has come to the center. Niyas Nizar and Vincent Gomez are next. Rohan Prem is nearing his fifty, he has been in good touch in this tournament. He will be hoping to get to his hundred too.

Live cricket scores Kerala 70/3  | Overs 33 | Batting: VA Jagadeesh 25(105), Rohan Prem 23(37): VA Jagadeesh is batting very patiently. He is on 25 having faced 105 deliveries. He is dealing only in singles and doubles having hit only one boundary in over a hundred balls faced. Kerala are trailing by 132 runs, they need a good partnership.

Live cricket scores Kerala 43/3  | Overs 24 | Batting: VA Jagadeesh 13(77), Rohan Prem 11(12): Kerala lose their prized wicket of Sanju Samson. He is unlucky and gets run out after scoring only nine runs. Rohan Prem has come after his departure. VA Jagadeesh is batting slowly at a strike rate of 17.72. Kerala needs a good partnership to take them to a good score, they are still trailing by 159 runs.

Live cricket scores Kerala 27/2  | Overs 18 | Batting: VA Jagadeesh 10(55), Sanju Samson 9(18): Kerala have lost their second wicket Ahamed Farzeen for two runs. Sanju Samson has come to the crease. VA Jagadeesh and Sanju Samson have a tough job ahead since Kerala is trialing by 173 and they have already lost two important wickets. 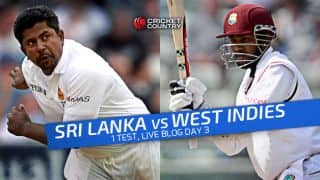