Hello and welcome to CricketCountry’s live coverage of Day 4 of the Ranji Trophy 2015-16, Group C match between Kerala and Tripura at the Perintalmanna Cricket Stadium in Mallapuram. Kerala have so far played four games with just a loss and three draws, failing to win a single game so far. Tripura, on the other hand, have played four games as well, but have lost three and just managed to draw a game. Considering this game, bothg the team would like to improve their prospects. However, looking at the current scenario until Day 3, the match sets to be heading towards a draw. Complete coverage of Ranji Trophy 2015-16

LIVE CRICKET SCORE Tripura 52/0 | Target 208 | Overs 17 | BATTING: Udiyan Bose 32(49), Arindam Das 18(55): Chasing Kerala’s 208, visitors finished at 52 for no loss on the final day and had to settle down for just one point. While, Kerala bagged three crucial points for their first innings lead. Tripura remain at the bottom of the table with two points. Kerala now has 12 points and will continue to hold the fifth spot in the Group C.

LIVE CRICKET SCORE Kerala 117/3 in Overs 19.2; BATTING: Rohan Prem 72(62), Sachin Baby 7(6): Kerala finally decide to declare their innings after reaching 117 for three, with Prem playing a rapid 62-ball innings of 72 that included seven fours and two sixes. The target for Tripura is now 229. Given the fact that there isn’t much time left in the day, it might be a difficult prospect for the match to arrive at a result, which makes a draw the most likely result at the moment. OUT! Sachin Baby c N Sen Choudhury b Mura Singh 18(29)

LIVE CRICKET SCORE Kerala 67/2 in Overs 11; BATTING: Rohan Prem 39(32), Sachin Baby 10(15): Tripura have been bowled out for 236 after resuming from their overnight score of 224 for 7, with Sandeep Warrier taking six wickets for 69 runs to finish as the pick among the Kerala bowlers. Meanwhile, Kerala start off on a shaky note, losing the wickets of Sanju Samson and VA Jagadeesh for 0 and 14 respectively. Rohan Prem, who is batting currently on 39, will look for a partnership with Sachin Baby at the other end to put his side in control. OUT! Sanju Samson c Arindam Das, b Mura Singh 0(4), VA Jagadeesh b Mura Singh 14(16)

As it stands for now, Tripura is likely to concede the first innings lead and it will take nothing short of a miracle for them to surpass Kerala’s first innings score. For Kerala the star performer in the game has been Rohan Prem having scored an impressive hundred. In the bowling department there have been good performances for both teams. Rana Dutta of Tripura took a fifer in the first innings. For Kerala Sandeep Warrier has been special having taken three wickets so far. 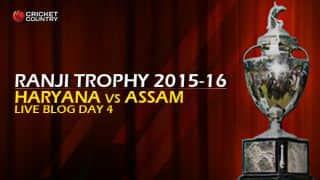