Follow the live updates of the CLT20 2014 match between KXIP and NK.

NK 81/4 | Overs 10
BJ Watling 6(7), S Styris 4(3)
Styris is the new man. Watling is on strike through and he finally gets a single off the third ball as he sweeps it to the deep. Styris then gets a four as an edge flies through third-man for a four.
NK 76/4 | Overs 9
BJ Watling 5(4)
Karanveer Singh is into the attack now. He bowls a dot ball upfront. Flynn then plays it through the off-side for a single. Watling then drives it to cover for a single. Flynn then sweeps one for a four. And Karanveer gets a wicket. Flynn is trapped in front and the Knights are in bigger trouble.
OUT! D Flynn 12(14)
NK 70/3 | Overs 8
D Flynn 7(9), BJ Watling 4(3)
Glenn Maxwell is brought into the attack and he bowls two dot balls. And then he moves past Flynn’s outside-edge. The wicketkeeper misses and they get one bye. In fact, there was an edge and it is a run for Flynn. Watling tries to sweep first ball, but does not get it away. But after a couple of deliveries, he finally gets a four by sweeping it to fine-leg.
NK 65/3 | Overs 7
D Flynn 6(6), BJ Watling 0(0)
Akshar Patel, or should we say, Axar Patel is into the crease. Devcich gets a single first ball. And then Flynn finally gets off the mark as an inside edge goes for a four through fine-leg. At last. He would feel a lot better after two blobs. And Devcich is gone. he tries the reverse sweep and gloves it to short third-man. Later, Flynn smashes it to cover where Bailey fields it. There is a chance of a run-out, but the batsman has made it.
OUT! A Devcich 28(15)
NK 58/2 | Overs 6
A Devcich 27(13), D Flynn 0(2)
Thisara Perera pitches it short and Devcich pulls hard. It has gone for a four. Some of the replays show how well these two batsmen have run between the wickets. Williamson is gone. He tries to scoop him over the fine-leg region and instead gets an edge to the wicketkeeper.
OUT! K Williamson 20(15)

Twenty minutes of Viru is a better tonic than two hours of Cook, Ballance or Robson!

KXIP 40/0 | Overs 4
V Sehwag 14(8), M Vohra 23(16)
Scott Kuggeleijn is into the attack and he foxes Vohra with one that shapes away from him. Vintage Sehwag! Kuggleijn gives him room and it is short. He merely guides it over the third-man fielder for six. The fielder thought he was in business, but it sailed over his head.
KXIP 32/0 | Overs 3
V Sehwag 7(6), M Vohra 22(12)
Boult gets one to climb on Sehwag and he quite uncomfortably guides it past the first slip for a four. He then takes a quick single and has to put the dive in to get in. Vohra then pushes through cover and gets a couple. Vohra then gets a single.
KXIP 24/0 | Overs 2
V Sehwag 2(2), M Vohra 19(10)
Tim Southee starts off with a wide down the leg side and Watling fumbles behind the stumps. The batsmen run a bye. Vohra is then hit on the pads and it goes to the wicketkeeper. There is an appeal but it is not out. Vohra then flicks the ball to the square-leg region and they get a couple. Southee bowls it down the leg-side and Vohra tries to pull but misses. There is an appeal but it is given not out. Southee then bowls it short and Vohra tries to pull. He gets a top-edge and it goes for a six. Vohra then completes the over for a couple through the off-side.
KXIP 11/0 | Over 1
V Sehwag 2(2), M Vohra 9(4)
Virender Sehwag and Manan Vohra start the innings. Trent Boult has the new ball. Sehwag is a bit edgy to begin with but gets a couple. But, Vohra then gets one overpitched and drives it down the ground for a four. Beautifully played. He then flicks the next ball through the mid-wicket region and it is a four.

Hello and welcome to CricketCountry’s coverage of Champions League T20 (CLT20) 2014 match between Kings XI Punjab and the Northern Knights. Here are two very good sides looking to make a mark in the tournament.  Northern Knights had one bad game so far, whereas Kings XI Punjab have been in form and are looking to take that forward. If they seal a victory here, they more or less get their spot in the semi-finals. I am Nishad Pai Vaidya and will take you through the game.

There are a lot of things to look forward to in this game. An Indian fan would hope Virender Sehwag comes good and plays his natural game. There also is hope of the natural entertainers in David Miller and Glenn Maxwell to do their bit. on the other hand, Northern Knights would expect something from Anton Devcich and Kane Williamson at the top. You can read our preview here. Here are some of the key battles to look forward to. 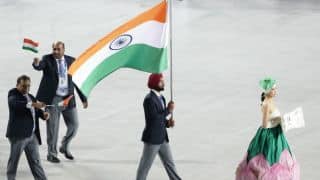