Catch all the updates and live scores of IPL 2015 Match 25 between KKR and RR here.

(Will Kolkata Knight Riders hand Rajasthan Royals’ yet another defeat? Catch all the updates and live cricket scores here)

07.17 PM: It’s official! The match has been called off! Both the teams share one point each now and Rajasthan Royals are back to the top spot in IPL 2015 Points Table. No change in KKR’s position as they remain on the third position. Chennai Super Kings are on No. 2.

07.08 PM: Kolkata Knight Riders (KKR) captain Gautam Gambhir and his Rajasthan Royals’ counterpart Shane Watson are said to have shaken hands, which suggests that the match has been called off. But wait, there is no official confirmation YET!

07.000 PM: The wait is not getting over, it seems. Alongside the umpires, it’s KKR’s Gautam Gambhir, coach Trevor Bayliss and Jacques Kallis and from RR it’s Shane Watson and Rahul Dravid, on the field.

06.45 PM: Umpires are finally out there, inspecting the field right now!

06.10 PM: While we wait for the game to start, if eventually it will, check this out:

Either the IPL has got far more crazy or Sky Sports have got their graphics wrong…#IPL #KKRvRR #KKR #RR pic.twitter.com/Tjci1Wz3YY

05.50 PM: The rain has stopped and the groundsmen are putting in the hard work to make the field ready for play. Stay tuned for updates.

05.08 PM: The news coming from Kolkata is that the rain has subsided and the ground staff is in action. The covers are being take off, let’s wait for more info.

Some movement at Eden Gardens. Pitch uncovered and the rain has stopped. Lots of work for ground staff. #KKRvRR #IPL2015

05.00 PM: The organisers are desperate to have a game in Kolkata. Here’s the latest update from IPL official account on Twitter:

16:55 Local: It’s got a little bit lighter. Everyone’s still got their fingers crossed for a game of cricket #KKRvRR pic.twitter.com/eGPZZm6oIS

04.50 PM: No sign of play resuming as of yet. The wait seems to be endless. Here’s what Aakash Chopra has to say, who is at the venue being a part of the commentary team:

Sorry to disappoint but nothing good to share from Kolkata…in fact, it’s raining harder now and the ground-staff has disappeared #KKRvRR

03.50 PM: The rains seem to be subsiding a big as the ground staff are on he field.

03.35 PM: The news from Kolkata is that it is raining persistently, and we can only wait and see if the match is happening at all. As of now, the entire field is covered and there is no sign of any spectators too.

Hello and welcome to CricketCountry’s coverage of Match 25 of Indian Premier League (IPL) 2015 between Kolkata Knight Riders (KKR) and Rajasthan Royals (RR) at the Eden Gardens, Kolkata, on Sunday. I am Devarchit Varma and I will bring you all the live updates from this game. Read the match preview here.

Table-toppers Rajasthan Royals face a massive test of character when they take on defending champions Kolkata Knight Riders. Both teams lost their previous encounters and will look to get back to their winnings ways through this match. For the Knights, it will be a return to their fortress after almost two weeks and with their vocal fans screaming their names, their confidence will be sky-high. The home team, who are third in the standings, have won three of their five matches so far while the Royals have clinched five out of seven. IPL 2015: Schedule with venue details

In the last match against Sunrisers Hyderabad, KKR failed to chase down 118 from 12 overs in a rain-curtailed game. Even though the top-order tried hard, they kept on losing wickets to eventually fall short of the target. However, Robin Uthappa’s knock of 34 showed signs of him inching towards form. The Royals too were convincingly beaten by the Virat Kohli-led Royal Challengers Bangalore (RCB) on Friday. A poor batting display gifted RCB an easy win. Even old war-horse, leg-spinner Pravin Tambe was unimpressive in the outing. IPL 2015: Points Table and Team Standings 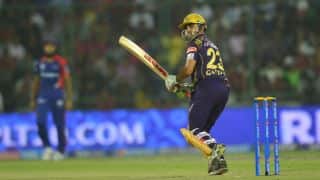