Do u reckon Chennai are getting a bit nervous now?!?? Incredible scenes and Bengaluru!! #CLT20

Match is resuming. Hafeez is at the crease to join Siddiq.

The play is scheduled to resume at 4.45 pm Local time.

If I know I gonna bat in monsoon rain then I bloody bat in underwear and rubber slipper & bring swim goggle. Bastard umpires.

The rain has stopped. Covers are coming off. Match will start within few minutes.

LL 2/1 | Over 0.3
U Siddiq 0 (0)
Out! Early blow for Lahore Lions. Jamshed gone for just 1. Worst possible start for Lahore Lions. And we are going off because of this heavy rainfall. The sun is out and bright though. Looking like a passing shower.
N Jamshed c B Hogg b Joel Paris 1(2)

Bancroft and Cartwright are the replacements for Voges and Coulter-Nile in the Scorchers side. And Umar Siddiq has replaced Shehzad, who is not fit. Also Agha Salman is out for Mohammad Saeed.

Perth Scorchers have won the toss and have opted to field.

Hello and welcome to CricketCountry’s live blog of the Match 19 of the ongoing Champions League T20 (CLT20) 2014 tournament, between the Lahore Lions and Perth Scorchers at the M Chinnaswamy Stadium in Bangalore. This is Sandipan Banerjee, and I will be bringing you the over-by-over updates of the match.

While the Scorchers are out of the tournament with their loss against Chennai Super Kings (CSK), Lahore Lions can still qualify if they win this game by 47 runs or 33 balls to spare.

The Pakistan T20 champions were well on course to give themselves a good advantage in their last game against Dolphins, where they had their opposition at 93 for nine. It is then that Robbie Frylinck started to bat with a ‘nothing to lose’ attitude, and scored a 27-ball 63 to seriously hamper the Lahore Lions net run-rate. Fans of CSK will be thanking Frylinck, for giving them a much better chance of making it to the semi-finals. 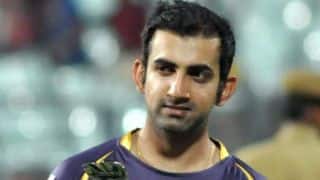