Catch all the third day's action of the match between Maharashtra and Assam here.

Hello and welcome to CricketCountry’s live blog of day three of the ongoing Ranji Trophy 2015-16 Group A match between Maharashtra and Assam in Pune on Monday. Not a single ball was bowled on day one due to wet outfield after heavy rainfall here at Pune. However, the match started yesterday i.e. on day two. Mahasrashtra won the toss and decided to bowl first. Assam did not start well and were three down for 13. Later, Amit Verma and Arun Kathick struck a partnership of 75 runs for the fourth wicket. It was broken by Samad Fallah by sending Amit to the dugout for 32 runs. After it, Arun Kathick and Gokul Sharma made an unbeaten 130-run partnership. They were batting on 105 and 59 runs respectively at stumps on day two and Assam were firmly placed on 223 for four. Complete coverage of Ranji Trophy 2015-16

Assam will be hoping to reach 400 today. There is a high possibility for this match to end in a draw since it is a three-day match as not a single ball was bowled on the first day due to wet outfield and the second day belonged totally to the batsmen. Maharashtra is at fifth position in Group A while Assam owing to better performance is two places up at the third spot. Assam won their last match against Delhi while Maharashtra were decimated by Bengal in their last encounter. Hence, judging by both overall performance and present form Assam are a better team. However, Maharashtra have some good players in the form of Shrikant Mundhe, Rohit Motwani and Chirag Khurana, a lot will depend on these players today. Assam’s chief players are Krishna Das and Arun Kathick. All Assam fans are hoping that Kathick will keep going strong today as well like yesterday. Assam also have a great bowler in the form of Amit Verma..

LIVE CRICKET SCORE Maharashtra 160/6 in Overs 54: Maharashtra are still behind Assam by 138 runs in the first innings, and it looks like that the touring party will take lead. Maharasthra were six wickets down at stumps on Day Three.  BATTING: Rohit Motwani 13 (34), Shrikant Mundhe 5 (14)

LIVE CRICKET SCORE Maharashtra 134/5 in Overs 46: Maharashtra are in trouble as they trail by more than 160 runs in the first innings, and already half of their side is back in the pavilion. Kedar Jadhav fell for 36 and with Rahul Tripathi, it is their captain Rohit Motwani at the crease. BATTING: Rohit Motwani 2 (13), Rahul Tripathi 42 (99)

LIVE CRICKET SCORE Maharashtra 41/2 in Overs 17: Sangram Atitkar fell for cheap as he could manage only six runs from the 11 balls he faced. Rahul Tripathi has joined Swapnil Gugale at the crease and apart from preserving the wickets, what Maharashtra desperately needs is a move on. From 17 overs, they have scored only 41 runs. BATTING: SM Gugale 17 (57), Rahul Tripathi 3 (14)

LIVE CRICKET SCORE Maharashtra 26/1 in Overs 10: Maharashtra have lost a wicket as Chirag Khurana was trapped in front of the wickets for 10 off 21 balls. Maharashtra will have to be careful hereon, as they still trail by a huge margin. Sangram Atitkar is at the crease. BATTING: SM Gugale 8 (33), Sangram Atitkar 4 (6)

LIVE CRICKET SCORE Maharashtra 12/0 in Overs 6: Assam were bowled out for 298 in the first innings, and in reply, Maharashtra are 12 for no loss after six overs. SM Gugale and Chirag Khurana are batting at six not out each. Shrikant Mundhe claimed four wickets while three other Maharashtra bowlers claimed two wickets each. BATTING: SM Gugale 6 (21), Chirag Khurana 6 (15)

LIVE CRICKET SCORE Assam 255 for 4 in Overs 92: Assam have resumed their innings and their batsmen KB Arun Karthick and Gokul Sharma are leading their charge. Arun Karthick is batting on 116, while Gokul is on 76 not out. The two batsmen have added 162 runs for the fifth wicket. This is the third day in the game and with the first innings in progress, it can be assumed that this game could end in a draw. BATTING: KB Arun Karthick 116 (254), Gokul Sharma 76 (143) 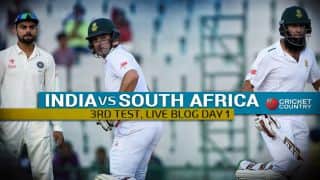