On Day 1, Sehwag showed glimpses of his vintage self, with his 92 off 129 balls that had 15 well-timed boundaries.

Hello and welcome to CricketCountry’s live coverage of Day 2 ofthe first Group A game of the 2015-16 Ranji Trophy between Maharashtra and Haryana at the Maharashtra Cricket Association Stadium in Pune. Maharashtra, were previously known to be one of the tough contenders in Indian domestic cricket. However, for the past few years, they have more or less dried out of their known fame and are hardly considered as the top contenders in the structure. Nevertheless, they are the former two-timne champions of India, and in the game of cricket, noithing is impossible as Mahrashtra are well capable of re-writiing history once again. Haryana, on the other hand, are defenitely on song, especially after the signing of the explosive opener from Delhi, in the form of Virender Sehwag, and could well prove to be a title contender this season.

On Day 1, Sehwag showed glimpses of his vintage self, with his 92 off 129 balls that had 15 well-timed boundaries. He added 124 runs for the third wicket with centurion Himanshu Rana, who dropped anchor scoring a solid unbeaten 138 off 236 balls that comprised of 20 boundaries. The Haryana captain came at the start of the second over and by the 9th over, the visitors were reeling at 32 for three with Rahul Dewan (6), Chaitanya Bishnoi (4) and Sachin Rana (7) back in the hut. There were no half measures in Sehwag’s approach as he counter-attacked the Maharashtra attack of Samad Fallah, Shrikant Mundhe, Dominic Mutthuswamy and Nikit Dhumal, reports PTI.

Live cricket score Maharashtra 7/0 | Overs 3 | BATTING: S M Gugale 5(9), Harshad Khadiwale 2(9): After bowling out Haryana for a total of 335, Maharashtra openers are out to begin their first innings. They have started slow, with one boundary from the first three overs, cpming from Gugale from the 26-year-old Ashish Hooda’s first over. 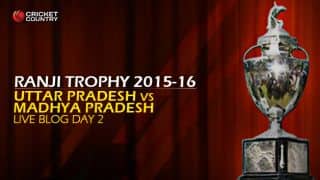