Live Score at the end of Day 1:

Maharashtra are slowly coming back into game as both the Tamil Nadu openers are dismissed now.  After winning toss TN skipper, Abhinabha Mukund decided to bat first and lost only one wicket in the first session. For Maharashtra new ball bowler Sanklecha got the important wicket of Mukund. On a pace friendly Eden Gardens track, losing just one wicket in the morning session is a not a bad achievement. But just after lunch their inform opener, Murali Vijay also got out. Now the game is in balance.

Quote: “I believe we have the best seam bowling attack in the country.” – David Andrews, Maharashtra coach

#RanjiTrophy This would be the 1st time Tamil Nadu will face Maharashtra in neutral territory 11 encounters: TN have won 4, lost 3 & drawn 4

Tamil Nadu win the toss and elect to Bat first.

Hello and welcome to CricketCountry’s coverage of of the second semi-final of Ranji Trophy 2014-15 between Maharashtra and Tamil Nadu at the Chinnaswamy Stadium, Bangalore. We will be bringing all the updates of this knock-out game here.

Tamil Nadu sailed into the semi-finals of Ranji Trophy 2014-15 by virtue of their 144-run first innings lead over Vidarbha in the quarter-final match which ended in a draw at Sawai Man Singh Stadium in Jaipur on last Friday. Vidarbha, who were totally outplayed by Tamil Nadu, were left with a nearly impossible victory target of 411 runs on the final day of the match. They were reeling at 142 for eight in their second essay when umpires called off the match after taking consent of both the captains.

Tamil Nadu are playing last season’s runner’s up Maharashtra at the historic venue of Eden Gardens Kolkata. The conditions over there is expected to be helpful for the pace bowlers and both teams have some quality pacers on their ranks. Also of eyes will be on Kedar Jadhav of Maharashtra and Murali Vijay of Tamil Nadu. Both have done well for their teams in recent past, and their teams will depend on them to come good in this game. 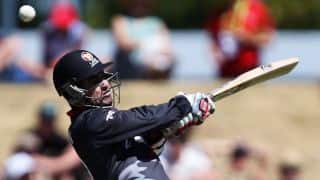