Catch the live updates of the second fixture of the inaugural Masters Champions League Twenty20 here.

Hello and welcome to CricketCountry’s live coverage of the second match of the inaugural Masters Champions League (MCL) Twenty20 tournament, which will take place between Capricorn Commanders and Leo Lions. We shall keep you updates of the match as and when they happen. Capricorn Commanders will be skippered by England former captain Paul Collingwood with Leo Lions being led by West Indian maverick Brian Lara. MCL started with much fan-fare with the inaugural being a high scoring affair with Gemini Arabians registered a mammoth 78-run win over Libra Legends in Match 1 of the much hyped Masters Champions League (MCL) 2016 at the Dubai Sports Complex.

LIVE CRICKET SCORE: Capricorn Commanders 110/6 in 17.2 overs | Target 157 |  Rikki Clarke 0(0), Geraint Jones 1(2): Leo Lions take the crucial wicket of Abdul Razzaq. Paul Collingwood and Rory Kleinveldt too fall cheaply. Lions are in the driver’s seat right now since Commanders require 47 runs from 16 balls which is a big ask and most of their key batters are back in the pavilion. OUT! Abdul Razzaq c Herschelle Gibbs b Fidel Edwards 7(10), OUT! Paul Collingwood b Edwards 19(21), OUT! Rory Kleinveldt c Marshall b Edwards 0(1)

LIVE CRICKET SCORE: Capricorn Commanders 100/3 in 15 overs | Target 157 |  Abdul Razzaq 3(5), Paul Collingwood 15(15): Leo Lions pick their third wicket; Chamara Silva gets out for 12. Things are looking difficult for the Commanders now. Paul Collingwood is at the crease batting at a run-a-ball 15. Abdul Razzaq is the new batter at the crease. It is an ideal time for him. If he can bring out some of his cricketing flamboyance of his younger days today, Capricorn Commanders can win the game. It has been a brilliant comeback by Leo Lions. OUT! Chamara Silva c Robin Peterson b Johan Botha 7(12)

LIVE CRICKET SCORE: Capricorn Commanders 79/2 in 11.1 overs | Target 157 |  Chamara Silva 3(5), Paul Collingwood 5(4): Chamara Silva and Paul Collingwood are striving hard to keep the momentum going after the loss of two quick wickets. However, the run rate has considerably reduced after the fall of Symonds and then Prince. Will Commanders lose another wicket before they reach the 100-run mark? Let’s find out.

LIVE CRICKET SCORE: Capricorn Commanders 69/2 in 9.4 overs | Target 157 |  Chamara Silva 0(0), Paul Collingwood 0(0): Both Andrew Symonds and Ashwell Prince are back in the dugout. Symonds’ wicket was taken by the famous Zimbabwean bowler Heath Streak. He was one of the best to have come from the East African nation. Next to go was Ashwell Prince. He scored 34 runs off 37 balls. Commanders now need 88 more runs to win the match with 62 balls to go. Match is now more or less in balance; maybe slightly tilted in Commanders’ favour even now. OUT! Andrew Symonds c Herschelle Gibbs b Heath Streak 21(21), OUT! Ashwell Prince c Jarvis (sub.) b Styris 34(37)

LIVE CRICKET SCORE: Capricorn Commanders 61/0 in 8 overs | Target 157 | Ashwell Prince 31(29), Andrew Symonds 20(18): Both the openers are batting pretty well and runs are coming without much effort. They are batting sensibly and with discipline and are not trying to hit each and every delivery for a big shot. Lions desperately need a wicket now or they might very well lose this match within the next 6-7 overs itself.

LIVE CRICKET SCORE: Capricorn Commanders 36/0 in 3.1 overs | Target 157 | Ashwell Prince 14(13), Andrew Symonds 14(6): Capricorn Commanders have now started to hit big shots as well. Johan Botha and Fidel Edwards are bowling currently. Commanders now need 121 runs to win from 101 deliveries with nine wickets remaining. Looks easy but Commanders should not get lose. Lions have some good bowlers in their ranks who are capable of turning the match around.

LIVE CRICKET SCORE: Leo Lions 156/8 in 20 overs: Johan Botha 42(29), Darren Gough 0(0): Leo Lions close their innings on 156 for the loss of eight wickets in their allotted 20 overs. It’s a decent score considering that they were six-down when there were only 83 runs on the scoreboard. Johan Botha  remained unbeaten 42, a quickfire innings off just 29 balls which included three boundaries and two sixes. OUT! James Franklin c Clarke b Kleinveldt 31(31), OUT! Heath Streak run out 0(1)

LIVE CRICKET SCORE: Leo Lions 144/6 in 18.3 overs: James Franklin 28(27), Johan Botha 36(24): James Franklin smashed a Jeetan Patel’s delivery over the ropes. It was a few balls after Botha had also hit a four; that time off Ben Laughlin. Botha comes on strike again and hits two back-to-back sixes. Lions need more of these to finish somewhere between 160-170.

LIVE CRICKET SCORE: Leo Lions 120/6 in 17 overs: James Franklin 18(22), Johan Botha 23(21): Lions’ innings has reached its climax. James Franklin and Johan Botha have done the hard work by hanging around till the final few overs. Both the batters may change their batting gear now and we may see a flurry of runs or the Lions may very well get bowled out.

LIVE CRICKET SCORE: Leo Lions 97/6 in 13.5 overs: James Franklin 11(13), Johan Botha 7(11): Batsmen are looking to rotate the strike more frequently rather than defending the balls or going for big shots. That is ideally what is required from them now; just keep looking for singles and doubles till the 17th over with an occasional boundary off a lose delivery and go slam bang in the last 2-3 overs. At present their aim should be to survive till the 17th over at least.

LIVE CRICKET SCORE: Leo Lions 83/6 in 11.2 overs: James Franklin 8(9), Johan Botha 0(0): Jeeten Patel and Upul Chandana are bowling well in tandem. Commanders would like that they wrap up the remaining Lions’ batters in quick time. If the Commanders get lose now, there is always a danger for Lions to come back into the match. However, as per the match situation, Lions are in a very difficult position. From here, they reaching somewhere between 120-130 is also looking quite tough. OUT! Brendan Taylor lbw Patel 24(21), OUT! Scott Styris lbw Patel 0(1)

LIVE CRICKET SCORE: Leo Lions 75/4 in 10 overs: Brendan Taylor 19(16), James Franklin 6(7): Lara got out at the point region; he was trying to cut the ball. It’s a big wicket for Capricorn Commanders and Leo Lions are looking very jittery now. James Frnaklin has arrived at the crease. Lions are in danger for getting bowled out here. Can the Lions fight back? All their major batters are back in the pavilion. Franklin and Taylor have to bat very sensibly now. OUT! Brian Lara c Sub b Chandana 8(5)

LIVE CRICKET SCORE: Leo Lions 55/3 in 8 overs: Brendan Taylor 17(14), Brian Lara 2(2): Robin Peterson too follows suit. He tried hard to steady the ship but couldn’t keep the good work going. Star batsman Brian Lara has come to the middle after the departure of Peterson. Lions are struggling on 55 having lost three crucial wickets. A lot is expected from Lara from this moment on. Abdul Razzaq is bowling pretty well and one is reminded of his early days when he played for Pakistan. Capricorn Commanders will be hoping that he succeeds in picking up a couple of more wickets. OUT! Robin Peterson c Geraint Jones b Abdul Razzaq 9(13)

LIVE CRICKET SCORE: Leo Lions 45/2 in 6.4 overs: Brendan Taylor 9(10), Robin Peterson 9(11): Both, Brendan Taylor and Robin Peterson are trying to stabilise the innings after the fall of two quick wickets. They need to bat like this for a couple of more overs and then up the tempo from there on, a lot of batting is yet to come.

LIVE CRICKET SCORE: Leo Lions 29/2 in 4.4 overs: Brendan Taylor 2(5), Robin Peterson 3(4): Both the openers are back in the dugout. Marshall was unfortunate to get fun out for 20 while Herschelle Gibbs was caught by Rikki Clarke off Rory Kleinveldt for three runs. Leo Lions now require a partnership from Brendan Taylor and Robin Peterson to bail their team out of trouble. OUT! Hamish Marshall run out Abdul Razzaq/Geraint Jones 20(12), OUT! Herschelle Gibbs c Rikki Clarke b Rory Kleinveldt 3(8)

LIVE CRICKET SCORE: Leo Lions 21/0 in 2.2 overs: Hamish Marshall 18(10), Herschelle Gibbs 2(4): Hamish Marshall’s early onslaught has enabled Leo Lions to get off to a flyer.Marshall has hit two boundaries in his 18-run knock so far. He has faced bulk of the bowling as of now. Lions will be hoping that Herschcelle Gibbs too complements the other opener in the coming overs.

After the first match being a run fest it will be interesting to see how the pitch behaves in a hot and humid day. The first game was a day/night affair which saw about 230 runs being scored in the first innings and second innings producing about 160 runs with more wickets being lost .Lions will be captained by West Indian run-machine Brian Lara, who will be supported by former captains such as Heath Streak, Scott Styris, Brendon Taylor and Johan Botha. Capricon Commander will be skippered by England’s Paul Collingwood,will have players such as Michael Vaughan, Andrew Symonds, Abdul Razzaq in the squad. Vaughan had been named director cum players for them as well.

All the six teams are named after the zodiac signs: Virgo, Leo, Gemini , Sagittarius, Capricorn and Libra, the tournament will see the world greats play Twenty20 (T20) matches. Each of the teams will play one match against the rest of the teams in the group stage. 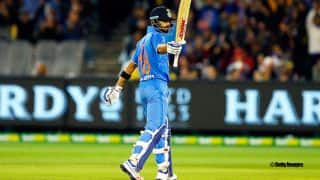