Hello and welcome to CricketCountry’s live coverage of the Ranji Trophy 2015-16 game between Mumbai and Uttar Pradesh at the Wankhede Stadium in Mumbai.

Hello and welcome to CricketCountry’s live coverage of the Ranji Trophy 2015-16 game between Mumbai and Uttar Pradesh at the Wankhede Stadium in Mumbai. Mumbai have had a briolliant season so far, as they sit atop the table, having played four games and have won a couple while have drawn the other couple as they have 17 points. Uttar Pradesh, on the other hand, have had a moderate season so far, having played four games with a couple of wins, a loss and a draw as they have 13 points in their pocket and claim the fourth spot in the table as of now.

In the previous game, left-arm spinner Saurabh Kumar finished with a 10-wicket haul in the match to help Uttar Pradesh post a 155-run win over Gujarat and earn six points from their Group B Ranji Trophy encounter on the third and penultimate day. Chasing 431 for victory, Gujarat’s one-down batsman Bhargav Merai chipped in with a crucial 54, while Manpreet Juneja (91 off 101 balls) and Akshar Patel (80 off 89) played gritty late-order knocks, adding 142 runs off 153 balls for the seventh wicket, but failed to avoid defeat. Saurabh, who claimed five for 37 in the first innings, once again wreaked havoc by taking five for 106 in the second essay to give the visitors an outright win. Chasing a massive target, Gujarat lost two early wickets to be reeling at 6 for two inside five overs. The home team, however, steadied the boat with a 60-run stand between Merai and captain Parthiv Patel (18), as reported by PTI. 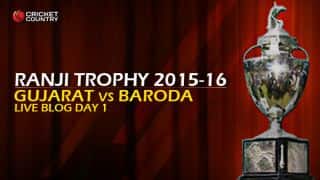