Hello and Welcome to CricketCountry’s coverage of the warm-up match of the ICC World T20 2016 between Afghanistan and Netherlands at Chandigarh. This will be a warm up match ahead of the mega event. Though Netherlands will not play any warm-up matches further, Afghanistan will play another match on March 6 at Mohali against Oman. Afghanistan has been grouped against Hong Kong, Scotland and Zimbabwe. While Netherlands is in Group A Bangladesh, Oman and Ireland. The winner of Group A will play in Group 2 of the main tournament and the winner of Group B will play in Group 1 of the tournament. There will be a total of 10 teams, including two from the qualifiers playing in the main tournament.

Live Cricket Scores, Netherlands 136/4 in 20 overs | TARGET: 153 | BATTING: Tom Cooper 50 (44), Roelof van der Merwe 15 (18): Afghanistan win the first warm-up match against Netherlands by 16 runs. This was the only match Netherlands could play before the final event begins and unfortunately started in a low note. Afghanistan remained confident throughout the game right from batting to bowling getting the crucial wickets at right moment. When the match seemed to turning towards Netherlands at one moment, the match suddenly twisted towards Afghanistan. Tom Cooper stood out for his innings scoring half-century while Mohammad Nabi, Dawlat Zadran, Shamiullah Shenwari and Rashid Khan got a wicket each, but as the overs were not much on hand and lots on runs on board, they lost the match against Afghanistan.

Live Cricket Scores, Netherlands 98/4 in 17 overs | TARGET: 153 | BATTING: Tom Cooper 28 (25), Roelof van der Merwe 2 (1): Just when Netherlands were catching the pace of the match and were almost towards the winning streak they have lost three wickets already. Tom Cooper has come to play while Roelof van der Merwe is the new batsman making way in the crease. Mohammad Nabi, Dawlat Zadran, Shamiullah Shenwari and Rashid Khan have got a wicket each so far. Afghanistan look to be easy winners of the game with 18 balls remaining and Netherlands require 55 runs to win. OUT! Ben Cooper b Samiullah Shenwari 14 (21), OUT! Wasley Barresi b Rashid Khan 27 (26), OUT! MJG Rippon c Noor Ali Zadran b Mohammad Nabi 11 (18)

Live Cricket Scores, Netherlands 50/1 in 8 overs | TARGET: 153 | BATTING: Wasley Berresi 25 (20), Ben Cooper 12 (17): Netherlands are playing very well and are half way through with 49 runs on board already. Netherlands are going for a boundary or two in every over and are looking to win this match from Afghanistan. Afghanistan bowlers seem to be helpless at the moment with no control of the wickets. And 50 up for Netherlands.

Live Cricket Scores, Netherlands 17/1 in 3 overs | TARGET: 153 | BATTING: Wasley Berresi 5 (4), Ben Cooper 4 (3):Hamid Hassan opens the attack for Afghanistan. Netherlands have Stephan Myburgh and Wasley Berresi on crease. The first over Hamid gave away a wide and and a boundary by Myburgh. The 2nd over and a wicket down of Muburgh by Dawlat Zadran who was the second bowler to open the attack. That turns to be a wicket maiden over by Dawlat. Ben Cooper is the new batsman on crease. Hamid Hassan has given an expensive over in the 3rd over of total 11 runs with two boundaries. OUT! Stephan Myburgh c Shafiqullah b Dawlat Zadran 5 (9)

Live Cricket Scores, Afghanistan 152/9 in 20 overs | BATTING: Dawlat Zadran 3 (6), Amir Hamza 0 (0): After 8 wickets down and 20 overs, Afghanistan have managed to score 150-plus runs on board and Samiullah remains the highest run scorer with 42 runs. Amir Hamza and Dawlat Zadran were the last batsmen who end the innings for Afghanistan. Vivian Kingma and Logan van Beek were the highest wicket taker’s for Netherlands with two wickets each. Netherlands have a target of 153 now to achieve from 20 overs. OUT! Shafiqullah c Kingma b van Beek 24 (13), OUT! Samiullah Shenwari c Rippon b van Beek 42 (39), OUT! Hamid Hassan run out 0 (0)

Live Cricket Scores, Afghanistan 102/6 in 15 overs | BATTING: Samiullah Shenwari 22 (27), Shafiqullah 1 (1): Two more wickets down for Afghanistan. This is not looking good after a good start to the innings. Rashid Khan is the new batsman come to bat while Samiullah is still playing on his side. Afghanistan are 100 up now. Another wicket down of Rashid Khan. Safiqullah is the new batsman on crease. Netherlands are fighting back after giving runs away. OUT! Rashid Khan lbw b Seelaar 10 (12), OUT! Najibullah Zadran c & b Mudassar Bukhari 0 (3), OUT! Gulbadin Naib run out 23 (14)

Live Cricket Scores, Afghanistan 73/3 in 9 overs | BATTING: Gulbadin Naib 15 (8), Samiullah Shenwari 12 (13): And Afghanistan are have given the perfect start to their innings so far. Noor Ali Zadran goes off the crease a perfect run out by Tim van der Gugten. Another wicket goes of Asfgar Stanikzai by Vivian Kingma. Gulbadin Naib and Mohammad Nabi have come to bat. The opening batsmen are out. Gulbadin is batting at strike rate of 250. Two more balls to go in the 6th over. Third wicket down of Mohammad Nabi by in the same 6th over. New batsman who has come in is Samiullah Shenwari. So far good start for Afghanistan but need to control the wickets. OUT! Mohammad Nabi c Barresi b Kingma 0 (1), OUT! Asghar Stanikzai b Kingma 25 (18), OUT! Noor Ali Zadran run out 18 (14)

Afghanistan have won the toss and elect to bat.

Afghanistan and Netherlands are at same level, though Netherlands are facing tough competition with Bangladesh in the same group and at present they are leading playing in the finals against India at Asia Cup 2016. Netherlands have the only opportunity to play well as this will be the oinly warm up match they will be playing. Afghanistan have opportunity coming soon after this match on Sunday against Oman at Mohali. Afghanistan has key players like Asghar Ztanikzai, Dawlat Zadran, Rashid Khan, Mohammad Nabi, Noor Ali Zadran who have been playing very well in T20 formats with the recent Asia Cup experience. While Netherlands will need to make themselves stand out in this tournament before the mga event begins next week. 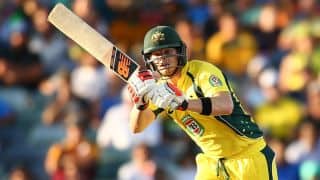