Netherlands host Nepal for the second T20I in Amstelveen.

Netherlands win by 103 runs. This was a complete performance from them, to extend their lead in the four-match series to 2-0. Nepal’s batting would need a boosting of morale from somewhere. Swart and Cooper laid the foundation for Netherlands, and an all-round bowling effort completed this victory for their side.

Nepal have been bowled out! Offbreak bowler O’Dowd takes his first wicket, as Vesawkar is out for 18, which is the highest score for any Nepal batsman today.

Max O’Dowd almost bowls a maiden over. Avinash Karn is the ninth wicket to fall.

Two singles taken. This match is headed towards only one direction.

Sompal Kami is out for 14, caught by Netherlands captain Peter Borren.

A three scored, probably the first of the match, and three singles taken.

Sompal Kami defending Paul van Meekeren, besides scoring a brace and a single.

Medium fast bowler Paul van Meekeren has dismissed two more Nepal batsmen (in the eighth over) — Basant Regmi and Pradeep Airee. Nepal have avoided the ignominy of registering the lowest score at which a team has been bowled out in T20s. That record, held by Tripura, who were bowled out for 30 against Jharkhand in an Indian domestic game, is still intact.

Nepal’s batsmen have been strangled as the runs haven’t been coming off the initial overs. Wickets are being lost quickly and consistently. Opener Gyanendra Malla got out off the first over, No.3 Binod Bhandari was out in the second, their captain Paras Khadka was caught out in the third, Subash Khakurel and Rajesh Pulami were both dismissed by Michael Rippon in the seventh over to all but seal the contest.

Barresi is out! He is bowled by Sompal Kami. Mudassar Bukhari gets out off the last ball of the innings, as Netherlands gather only three runs off the final over. The score, nevertheless, is big.

OUT! Ben Cooper departs for 66, ending a stand of 131 runs. Wesley Barresi, the next man in, hits two sixes off the last two balls of the over, his first two balls. The score is already intimidating.

Another big over, ten runs coming from it. After six runs are run off five balls, the last ball is hit for four by Swart.

Ben Cooper has broken all shackles! He has hit Khadka for two sixes and a four, thereby also completing his half-century. The two batsmen are unbeaten on 63. The partnership is worth 116 runs.

SIX! Left-arm bowler Avinash Karn is lofted to mid-on for a big six by Cooper, who also hits a four on the last ball. Netherlands rushing along at 7.68 runs per over.

Cooper has hit a boundary, and four byes are collected off the next ball, as the over goes for 12 runs!

Six singles off this over.

Paras Khadka gives away 10 runs off his third over. Swart hits him for four on his last ball.

Ben Cooper and Swart milk Regmi around to collect seven runs off the over. Swart completes his half-century — 50 off 40 balls.

Swart has made his way to 47. He is steering his team towards a commanding total. Three singles and a double from this over.

Swart hits a six! This is the first six of the match; he hits a slog sweep.

A couple off the first ball by Cooper, and four singles off this over by the medium fast bowling of captain Paras Khadka

Swart has raced to 34 off 29 deliveries, as Netherlands have got a solid base to put up a big first-innings score. This over by Basant Regmi, though, is a quieter one, with five singles.

Eight runs off the over, including four byes.

Three fours off this over (two by Swart) gets Netherlands to a run-rate of seven.

Debutant Visee is out! He is caught at mid-off off Karan KC’s bowling for 4.

Michael Swart hits the third four of the innings, a pull shot. He is dropped at cover off the fifth ball of the over.

Five runs off the over with a braces and three singles.

Michael Swart has hit a couple of boundaries — a cut towards the point region and a flick to midwicket — to get Netherlands to a positive start.

TOSS: Paras Khadka has won the toss and has elected to field first.

Welcome to CricketCountry‘s coverage of the second Twenty20 International between Netherlands and Nepal in Amstelveen. The first T20 had Nepal falling short of Netherland’s total of 134 by 18 runs. Captain Paras Khadka held the ship for Nepal, but the rising run-rate proved a tough ask. Both teams lost early wickets; while Nepal failed to accelerate during the middle period, Stephan Myburgh got Netherlands to a slightly better position. LIVE CRICKET SCORECARD: Netherlands vs Nepal, 2nd T20I, Amstelveen

The teams are playing this series as preparation for the crucial World Twenty20 Qualifiers in Ireland and Scotland. Khadka had already indicated in his interview with CricketCountry that his team may take a bit of time to get suited to the conditions in Europe, and after the close game on Tuesday, they will look to sharpen their performance to stage a comeback.

Netherlands, led by Peter Borren, have tested quality in their experienced line-up. 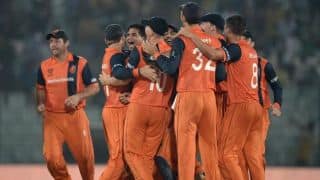 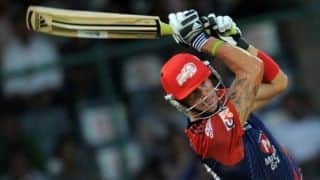