New Zealand will aim to comeback strong in the second Twenty20 International at Hamilton on Tuesday against England. 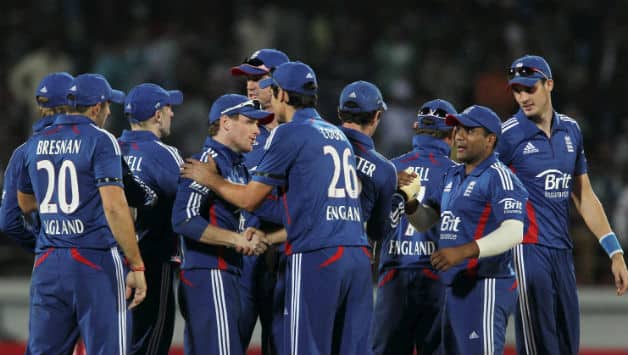 New Zealand will aim to comeback strong in the second Twenty20 International at Hamilton on Tuesday against England.

England won the first T20 match against New Zealand by 40 runs on February 9.

Earlier, England Twenty20 captain Stuart Broad on Saturday heaped praise on his side after their 40-run win against New Zealand in the first T20 tie at the Eden Park in Auckland.

England set a huge target of 215 against the Kiwis after being asked to bat first and successfully defended it by restricting the hosts to 174 for nine in the allotted 20 overs, to begin their tour on a winning note.

Broad told Sky Sports 1 that this was their best win under his captaincy.

“Certainly [the best win] that I’ve captained,” he said.

“Looking back to the 2010 World Cup where we won we were fantastic throughout that tournament, but to go and get a record score of 214, that’s the exciting thing in the team, to  have that mindset to go and get such a high score.

“A lot of the time you think 170, 180 is a good score. To go and get such a high score and defend it comprehensively, we’re delighted with that,” he said.

Broad, who claimed four wickets in the game, taking his overall wicket tally in the shortest format of the sport to 52 in 44 appearances – most for England – was not aware of the record.

Catch live scores and ball-by-ball commentary of the second T20 between England and New Zealand at Hamilton here.

South Africa vs Pakistan 2013: Visitors turn to religion after string of injuries