Hello and Welcome to CricketCountry s coverage of the second Twenty20 International (T20I) between New Zealand and Pakistan at Auckland.

Hello and Welcome to CricketCountry s coverage of the second Twenty20 International (T20I) between New Zealand and Pakistan at Auckland. I am Paulami Chakraborty and I will bring you over-by-over updates of the match. This is the second of three T20Is of the series and the series will be followed by three One-Day Internationals (ODIs) series. Pakistan will be high on confidence as they have already won the first match of the T20I series and another win will seal the deal for them. On the other hand, the hosts New Zealand would look forward to bag their first victory in the series to keep their hopes alive. LIVE CRICKET SCORECARD: New Zealand vs Pakistan 2016, 2nd T20I at Hamilton

Live Cricket Score, New Zealand 148/0 in Overs 16, Batting: Martin Guptill 75(51), Kane Williamson 66(45):NEW ZEALAND WIN BY 10 WICKETS!Martin Guptill and Kane Williamson make a number of records as the openers guide their side to a comfortable victory with a single-handed effort. They score the highest opening run partnership during a run chase as they go past 144 runs and also register the highest run partnership for any wicket in T20Is. They also help their team to chase down the highest amount of runs without losing a single wicket. A brilliant chase and a very good comeback by the hosts in the second T20I as they have now leveled the series 1-1 with Pakistan.

Live Cricket Score, New Zealand 115/0 in Overs 13, Batting: Martin Guptill 54(42), Kane Williamson 54(36): Pakistan bowlers look helpless in front of the partnership of Guptill and Williamson. Both the batsmen have settled down nicely and look to end it for Pakistan all by themselves. New Zealand badly need the victory to stay valid in the series. The two know the fact quite well and playing accordingly. If Pakistan lose it from here, Akmal

‘s efforts will go in vain. Afridi also failed to make any prominent mark with his performance today.

Live Cricket Score, New Zealand 59/0 in Overs 6, Batting: Martin Guptill 25(21), Kane Williamson 29(15):After three expensive overs, Shahid Afridi calmed things down a bit with his overs. Pakistan look in deep trouble as New Zealand openers still there at the crease and Pakistan are yet to get a wicket. Things getting harder and harder for the visitors as the runs is quite gettable here. Scalping wickets are the only way to stop the rain of runs.

Live Cricket Score, New Zealand 31/0 in Overs 3, Batting: Martin Guptill 11(9), Kane Williamson 20(9): Not a very impressive start by Pak bowlers as runs are coming fast and easy. Williamson looking forward to end things fast and that is what is reflecting from his body language. Pak fielders will also have to perform well and stop runs coming from singles.

Live Cricket Score, Pakistan 168/7 in Overs 20, Batting: Wahab Riaz 0(0), Umar Akmal 56(27): And what a happening finish by Pakistan! They found the batsman they were looking for to stable things down and score runs in Umar Akmal. A very important and commendale 5 for the man in time of need and Pakistan have yet again come back strong. Afridi and Wasim scored their runs in sixers while Malik served as the perfect partner to Akmal. The score looks decent. A brilliant last over by New Zealand. Awesome run out by Milne in last over while Akmal hits an important boundary off the penultimate ball.

Live Cricket Score, Pakistan 127/3 in Overs 16, Batting: Shoaib Malik 38(27), Umar Akmal 34(17):A much needed partnership between Akmal and Malik as their partnership has so far added 60 runs. 100 comes up for Pakistan. Both Akmal and Malik look comfortable to hit sixers and boundaries and they are doing that. Pakistan need good runs now as just 4 overs are left to go. On the other hand, New Zealand has done a good job as with this runrate, it looks difficult for Pakistan to go past 150which means immense pressure on their bowlers as the ground is short and sixers and boundaries are easy.

Live Cricket Score, Pakistan 91/3 in Overs 13, Batting: Shoaib Malik 21(18), Umar Akmal 16(6): Pakistan keep on losing wickets as Maqsood departs making 18. Umar Akmal hit consecutive sixers. Much needed runs for the visitors as their run rate was going down. These two need to stay at the crease and serve till the end for an impressive target.

Live Cricket Score, Pakistan 53/2 in Overs 9, Batting: Shoaib Malik 4(5), Sohaib Maqsood 16(18): And a big blow for Pakistan as their hero of last match Hafeez departed making only 19. Williamson has been cleverly rotating the bowlers and getting wickets in time. Pakistan still in search of a good partnership here. 50 runs up for the visitors. Meanwhile, it’s the 500th international match hosted by New Zealand, they become the second to do so, after Australia.

Live Cricket Score, Pakistan 22/1 in Overs 6, Batting: Mohammad Hafeez 12(12), Sohaib Maqsood 7(6): Again an early wicket for Pakistan as Shehzad departed soon after hitting a sixer and a boundary. He looked good but Corey Anderson made a good comeback after his 18-run over in the last match as he has removed a danger man. Pakistan need a long and stable partnership.

Live Cricket Score, Pakistan 22/0 in Overs 3, Batting: Mohammad Hafeez 12(12), Ahmed Shehzad 7(6): And Shehzad goes off the mark with a clever sixer over long on. Pakistan look pretty confident and determined to win the game and seal the T20I series 2-0 at Hamilton itself. Shehzad and Hafeez have started hitting boundaries and easy runs are coming there way. New Zealand bowlers need to be careful.

TOSS: Pakistan won the toss and elected to bat.

Pakistan played really well in the last T20I against New Zealand as they came back strongly after a weak start. New Zealand, winning the toss, sent the visitors to bat and quite successfully bagged some early wickets. It was Mohammad Hafeez who kept his nerves and went on to score a match-saving 61 off 47. After Hafeez’s departure, Pakistan’s T20I captain and dependable all-rounder Shahid Afridi took the charge as he boosted the scorecard with his quickfire 23 off 8. More contributions came from the lower-order batsmen as Pakistan posted a decent 171 run target. Adam Milne did really well, taking 4 wickets while he was well supported by Mitchell Santner’s 2 for 17. READ: New Zealand vs Pakistan 2015-16, 2nd T20I at Hamilton Preview: Hosts look to register 1st win

Chasing it, the hosts started off really well as both the openers scored their individual half-centuries. But after Colin Munro’s departure, New Zealand looked helpless in front of Pak bowling as they went on losing wickets at one end, while their skipper Kane Williamson kept on building a good knock. But his 60 ball 70 could not save them from a 16 run defeat as Pakistan bowled them by 155. Wahab Riaz did an outstanding job with the ball as he took three crucial wickets but the best performance came fro Afridi as he took a couple of wickets and remained vital in four dismissals. He was later handed the Man of the Match award. 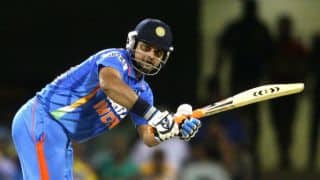 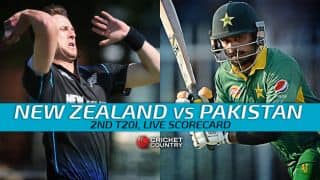