Earlier, New Zealand made 441 in their first innings .

(Will Sri Lanka manage to impress in foreign conditions or New Zealand will dominate at home? Catch the live cricket score of Day 3 of first Test)

Dimuth Karunaratne reached his maiden Test century off 255 balls in the first Test played against New Zealand at Christchurch on Sunday.

Karunaratne improved his previous performance and looked compact and solid.  He stood tall and provided stability to the Sri Lankan innings. He was removed by Trent Boult only in the first over of Boult in the previous innings for  nought. But this time around he came to the crease with great resolve and guided the Sri Lankan innings.

Kumar Sangakkara’s last 5 innings against NZ: 1, 6, 16, 0, 5. Three of them were at Home and three times dismissed by Trent Boult. #NZvSL

Sri Lanka 111/2 | Overs 49
Dimuth Karunaratne 66 (158), Lahiru Thirimanne 5 (15)
After getting out cheaply in th first innings, Karunaratne has done well here to bring up his half-century. He needs to continue for a long time to help Sri Lanka save this Test match. Neil Wagner who picked up three wickets in the innings has been wicket-less so far. He has conceded 40 runs so far. Along with Karunaratne, Lahiru Thirimanne is on the crease.
Sri Lanka 98/2 | Overs 43
Dimuth Karunaratne 58 (133), Lahiru Thirimanne 4 (4)
Trent Boult has done it second time in a row. He has got the big wicket of Kumar Sangakkara. Sangakkara has been dismissed for just one runs after playing 25 deliveries. It was a full delivery outside off and Sangakkara edged to the first slip. New Zealand will be really delighted to get this wicket. It was the second wicket of the day for them.
OUT!!Sangakkara c Watling b Boult 1(16)
Sri Lanka 90/1 | Overs 40
Dimuth Karunaratne 54 (127), Kumar Sangakkara 1 (8)
Tim Southee has picked the first wicket for New Zealand this morning. It was pitched outside off on good length and Kaushal Silva got a hint of his bat on the ball. New Zealand would be really happy to get the first wicket only in the first over of the day. Trent Boult and Tim Southee now have an opportunity to finish it early but Kumar Sangakkara’s wicket would be the key here.
OUT!!!Kaushal Silva c Watling b Southee 33(106)

Earlier, New Zealand made 441 in their first innings as skipper Brendon McCullum piled up 195 off 202. His knock included 18 boundaries and 11 sixes. He was included in 153-run partnership with Jimmy Neesham for the fifth wicket which set up the groundwork for a big score. Sri Lanka need to invent some hope into the match if they need to bounce back. They would want to trust their most experienced batsmen, Kumar Sangakarra to get some runs.

The third day of the Test will be crucial for both teams as they would want to make lasting impression. Both the Sri Lankan openers would want to stay in the crease for most of the day. While for the hometeam they would rely on their pace duo of Tim Southee and Trent Boult to get them the wickets. Sri Lanka need to bat really well to make a lasting impression in the first Test of the two matc Test series. 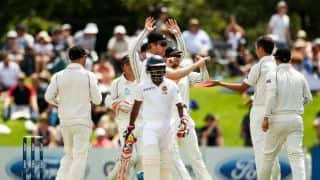 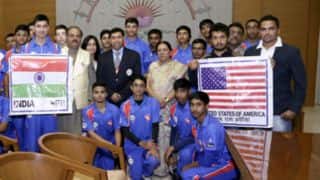