(Will Sri Lanka manage to impress in foreign conditions or New Zealand will dominate at home? Catch the live cricket score of Day 4 of first Test)

Sri Lanka were bundled out for 407 on Day Four in the first Test played against New Zealand at Hagley Oval on Monday. New Zealand have taken a 1-0 lead as Kane Williamson has dropped the anchor and Sri Lanka failed to create enough chances to breakthrough. New Zealand started the day on a good note as Tim Southee was quick to remove Tharindu Kaushal. It was a short delivery by Southee which took the edge of Kaushal and was caught by Mark Craig in the slips.

Southee struck again. This time it was the big wicket of Angelo Mathews. Mathews who had stood tall and framed the Sri Lankan innings was removed by Southee. It was a short ball from Southee which took a faint edge and was caught by Watling behind the wickets. Mathews contributed 66 this time, last time around he scored 50.

New Zealand 107/2 | Overs 30.4
Ross Taylor 39 (63), K Williamson 31 (75)
It’s all over! New Zealand are 1-0 up in the series as they have registered a comprehensive win against the Sri Lankans. New Zealand team under Brendon McCullum have been on a rise in the past couple of months and they are reaping benefits of all the hard work. Sri Lanka, surprisingly, have been on losing end on many occasions since that India tour and this loss would certainly hurt them.
New Zealand 94/2 | Overs 29
Ross Taylor 29 (56), K Williamson 28 (72)
New Zealand need only 11 more runs to win this game. They have been simply outstanding in the match.
New Zealand 76/2 | Overs 24
Ross Taylor 15 (45), K Williamson 24 (53)
New Zealand need only 29 more runs to take a 1-0 lead in this series. They have been totally brutal with their performance, as they have successfully carried the momentum from the Pakistan series in the UAE, wherein they drew the Test series and won the One-Day Internationals. It’s time for tea!
New Zealand 54/2 | Overs 16
Ross Taylor 4 (17), K Williamson 18 (32)
Sri Lanka have snapped up another wicket here. But at this stage they might be feeling they have too less runs on the board. Maybe, if they had around some 100 runs more they could have created some chance.  If Kane Williamson and Ross Taylor continue to bat together for at least this session New Zealand would win this quite easily.
Out!! Rutherford c Dickwella b Eranga 10(24)
New Zealand 31/1 | Overs 9
H Rutherford 8 (17) , K Williamson 6 (13)
Sri Lanka have got an early breakthrough here.Tom Latham is the first man to be dismissed by Tharindu Kaushal. The debutant has got the wicket.It was a full delivery from around the wicket and Latham got the edge to the Angelo Mathews at first slip. Sri Lanka would still imbibe some hope after that first wicket.
OUT!!! Latham c Mathews b Kaushal 17(24) [4s-3]
Sri Lanka 407 | Overs 154
Shaminda Eranga 45 (62)
That’s all over. Sri Lanka have been bundled out for 407. The 10th wicket partnership between Suranga Lakmal and Shaminda Eranga was worth 59 and delayed the inevitable. So, New Zealand need 104 runs to win the first Test match. It won’t be too difficult for them to get them. Sri Lanka would back themselves to do something unusual here.
OUT!! P Jayawardene c Southee b Craig 23(38) and Lakmal c Southee b Boult 16(23)
Sri Lanka 336/8 | Overs 141
Prasanna Jayawardene 15 (30), Shaminda Eranga 3 (17)
Another wicket falls. Southee is on a roll here. Third wicket of the morning for Tim Southee. It’s just a matter of time before New Zealand achieve there first win at Hagley Oval. Dimuth Karunaratne and Angelo Mathews played well for Sri Lanka but others just surrendered themselves quite easily. Failure of Kumar Sangakkara in both the innings would also haunt Sri Lanka.
OUT!!! Dhammika c Ross Taylor b Southee 4(17)
Sri Lanka 325/7 | Overs 136
Prasanna Jayawardene 7 (19), Dhammika Prasad 4 (13)
Here is the big wicket, that New Zealand were looking for.  Sri Lankan captain , Angelo Mathews perishes and Southee has done the trick yet again. It was a short delivery from Southee and Mathews who decided to pull it gets a edge to the keeper. Now, New Zealand have an easy job to do.
OUT!!! Angelo Mathews c Watling b Southee 66(127)
Sri Lanka 320/6 | Overs 132
Prasanna Jayawardene 7 (10) Angelo Mathews 66 (125)
So, Tim Southee gets the first wicket of the morning. It’s the wicket of Tharindu Kaushal. Mark Craig takes the catch at the second slip. Sri Lanka will be still relieved as the captain of the team, Angelo Mathews is still on the crease. He was among the runs in the first innings and this time again he has got the half-century. He needs someone to stay with him on the crease but it will be tough ask for Sri Lankan batsmen.
OUT!! Kaushal c Craig b Southee 12(27)

The first hour of day Four will be crucial for both the teams. The first object for Sri Lanka will be to play the first session without losing any wicket, which will be tough for the batsmen. Keeping the inform Kiwi batting line-up in mind, Sri Lanka would like to post atleast a target of 250 runs  for the hosts in their second innings. On that regard the wicket of Mathews will be vital for both the teams. Trent Boult’s press conference report here.

For New Zealand the equation is quite simple. Take the remaining five Sri Lankan wickets as early as possible, chase whatever little target they will give and pocket the game. They will look towards Trent Boult and Tim Southee to do the job for them. Also Neil Wagner who took three for 60 in the first innings will look to add variety with his left arm medium pace.

It is going to be a crucial Day Four of the Test match. In Tests, Sri Lanka’s record away from home is not very good. But they have shown improvement during their last tour of England, where they beat the hosts in the Test series.If they can produce another noticeable performance against a quality opponent like New Zealand, it will enrich their cricketing history. 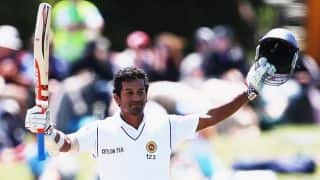 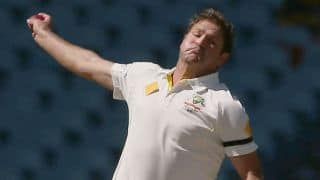