Catch the live updates of the all the action from the fourth day of the third Test at Wellington here.

Catch the live scorecard of the second Test between New Zealand and Sri Lanka
(Can Sri Lanka challenge New Zealand in their own backyard or can New Zealand carry on the momentum from the first Test and pose yet another huge victory? Catch Live cricket scores here)

Kane Williamson and BJ Watling have extended both the sixth-wicket stand and New Zealand’s lead over Sri Lanka beyond the 200-run mark as New Zealand are firmly in command of the match at the moment. The presence of the pair continues to be a source of hope for the Kiwis to set a big target for the Sri Lankans, and whitewash the series 2-0.

The game is evenly poised between the two sides as New Zealand finished on a score of 253 for five at stumps on Day Three of the second and final Test against Sri Lanka. Kane Williamson and BJ Watling, who have shared an unbroken 94-run partnership for the sixth wicket so far, will be crucial to the Kiwis’ fate on the fourth day. The Sri Lankans on the other hand will have their eyes set on an early wicket.

Sri Lanka 30/0 | Overs 17
Kaushal Silva 20 (49), Dhammika Prasad 1 (19)
STUMPS!!!! That’s it for today. A sad day for Sri lanka as they failed to get a single wicket on the day and in turn lost one of theirs after being set a massive target of 390. Would be interesting to see how things unfold tomorrow.
Sri Lanka 30/0 | Overs 11
Kaushal Silva 14 (37), Dimuth Karunaratne 9 (26)
As the declaration comes from the Kiwis after the record-breaking partnership of 356 runs, Sri Lanka have been set a target of 390 to win the finals Test as Silva and Karunaratne open things for the Lankans
New Zealand 478/5 | Overs 164
Kane Williamson 214 (408), BJ Watling 127 (315)
Double hundred by Williamson and a massive 300-run partnership comes up between him and Watling for the sixth wicket as New Zealand have a lead of 339 runs with the Sri Lanka bowlers struggling to get this pair done with.
New Zealand 434/5 | Overs 154
Kane Williamson 189 (380), BJ Watling 108 (283)
The fourth Test century is up for BJ Watling and he has been sensational so far. A good innings so far under good circumstances after recovering well from the Day 3 slump and earning a healthy lead. Would be interesting to see now if Williamson gets to his double hundred.
New Zealand 403/5 | Overs 147
Kane Williamson 173 (354), BJ Watling 94 (266)
The Kiwis are just cruising in the second innings as they have a lead of 268 runs with Williamson rallying on 173 while BJ Watling continues to bat and is approaching his century as he is batting in the nineties. This is also the highest sixth wicket partnership for a New Zealand pair against Sri Lanka in Tests with the current partnership being 247.

The @BLACKCAPS have put on 45 partnerships of 100+ in Tests at the #BasinReserve. 10 of those have been for the 6th wicket. #Statchat #NZvSL

New Zealand 378/5 | Overs 142
Kane Williamson 157 (339), BJ Watling 86 (251)
Williamson will have their sights set on the record held by Jeff Crowe and Richard Hadlee for the highest sixth-wicket partnership for New Zealand against Sri Lanka, which was an unbeaten 246-run stand in Colombo in 1987.
New Zealand 359/5 | Overs 136
Kane Williamson 150 (322), BJ Watling 81 (230)
Kane Williamson brings up his 150 in 321 balls with a boundary towards the fine leg boundary. This is Williamson’s third 150-plus score in Test cricket, and the batsman will now set his sight on a double-century, which he had painfully missed out on by eight runs during the Test series against Pakistan in the UAE. Watling sets his sights on the possibility of a fourth Test ton, as New Zealand are firmly in control of things at the moment.

So much class being exhibited by both the @BLACKCAPS & SL in this series. Sri Lankans all just ran up to KW to congratulate him on his 100.

New Zealand 325/5 | Overs 128
Kane Williamson 121 (289), BJ Watling 76 (215)
And its lunch on Day Four of the second Test, with the hosts extending their lead to an impressive 190 with five wickets in hand. Williamson and Watling have brought up their ninth Test century and half-century respectively during this session, which fetched 72 runs for the Kiwis from 27 overs. New Zealand are clearly in control of things at the moment, and will look to consolidate on their lead in the following sessions as well.
New Zealand 286/5 | Overs 115
Kane Williamson 101 (244), BJ Watling 59 (181)
Kane Williamson continues his stellar form with the bat as he brings up his ninth Test ton, taking 243 balls to reach the milestone, which is also his first century in this series. The partnership between Williamson and Watling is now worth 127 runs, and New Zealand are in the driver’s seat at the moment as they stretch their lead to 151 runs, with five wickets still in hand.
New Zealand 261/5 | Overs 104
Kane Williamson 83 (210), BJ Watling 53 (148)
BJ Watling completes his ninth half-century, and has helped complete a 100-run stand with Kane Williamson, who is nearing his ninth Test hundred. The two look solid at the moment, as the visitors are desperately looking for a breakthrough in order to prevent the Kiwis from flying away with the match.

Hello and welcome to CricketCountry’s coverage of the fourth day of the second Test between New Zealand and Sri Lanka at the Basin Reserve at Wellington on Tuesday. We will be getting you all the live updates from the day’s play.

Hosts New Zealand finished on a score of 253 for five at stumps on the previous day, with Kane Williamson and BJ Watling batting on scores of 80 and 48 respectively. The duo have shared an unbroken sixth-wicket stand worth 94 runs, and are crucial to the hosts’ chances on the fourth day should they aim for a 2-0 whitewash of the series. The Sri Lankans, on the other hand, will need their bowling department, especially their pacers, to fire on the penultimate day and aim for a breakthrough, which should make the task of cleaning up the lower-order easy.

The day began with New Zealand resuming from their overnight score of 22 for no loss, with Tom Latham and Hamish Rutherford resuming from their overnight scores of nine and 12 respectively. The Kiwis were off to a strong start, putting up an opening stand worth 75 runs, with the prospects of them setting a major target for the Sri Lankans looking ripe.

It came to an abrupt end when Rutherford cut a rising Nuwan Pradeep delivery to send the ball over to the boundary near the third man region, where Dinesh Chandimal collected a neat catch. Fellow opener Latham followed him back to the pavilion in a while after edging a delivery that was pitched outside the off-stump to the wicket-keeper. Ross Taylor disappointed many a fan when he was bowled right through the gate off a tossed-up delivery by Rangana Herath.

A score of 96 for three at lunch looked like a bleak one for the hosts at the signal for lunch, although the presence of Williamson and skipper Brendon McCullum was a reassuring one. The two put up a healthy 43-run partnership, before McCullum was adjudged leg-before off the bowling of Dhammika Prasad. New Zealand lost their fifth wicket when Jimmy Neesham suffered a fate similar to the captain, this time off a Pradeep delivery.

Williamson and Watling batting with caution for the rest of the day as they saw the likes of Pradeep and Herath through the final session, ensuring that the Kiwis did not suffer any additional blows. While wicket-keeper batsman Watling was two runs away from his ninth Test fifty, Williamson is setting his sight at the possibility of a ninth Test ton. 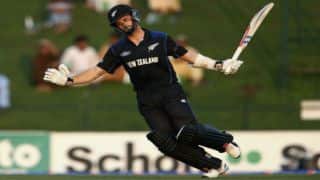