Catch the live updates of the all the action from the fifth day of the third Test at Wellington here.

(Can Sri Lanka challenge New Zealand in their own backyard or can New Zealand carry on the momentum from the first Test and pose yet another huge victory? Catch Live cricket scores here)

Sri Lanka were required to bat with a sense of caution, especially when half of their side was back in the pavilion. That however, was not visible in the shot that got Prasanna Jayawardene dismissed off the bowling of Mark Craig, attempting to smash a delivery that was pitched outside off towards the covers. New Zealand are all over the place at the moment as they have successfully tightened the noose around Sri Lanka’s neck, inching closer to a famous victory.

New Zealand are clearly on top of the game at the moment, as they have reduced Sri Lanka to 110 for the loss of five wickets at lunch on the final day after setting them a target of 390. While Mark Craig had set the wheel in motion in the final session of the fourth day, dismissing opener Dimuth Karunaratne, the pace duo of Trent Boult and Doug Bracewell have been the chief destroyers of the Sri Lankan batting order on the final day, helping send the likes of Kumar Sangakkara and Kaushal Silva, who was dismissed by Bracewell right after completing a half-century, back to the pavilion.

New Zealand complete clean sweep of 2-0 over Sri Lanka in this Test series. Now with the longer format being over, they would concentrate on the limited over format as they World Cup just over a month away to get underway in Australia and New Zealand itself.

Sri Lanka 196 | Overs 72.4
Lahiru Thirimanne 62 (144)
THAT’S IT!!!!! New Zealand have won it by 193 runs and pocket the series 2-0 with a clean-sweep. Thirimane remains unbeaten on 66 while Nuwan Pradeep is the last man to be dismissed for a single as he is bowled by Tim Southee.
OUT! Nuwan Pradeep b Southee 1 (2)
Sri Lanka 194/9 | Overs 71
Lahiru Thirimanne 61 (136), Nuwan Pradeep 0 (0)
ANOTHER ONE!!!! Suranga Lakmal this time and what an unfortunate way to get out, a run-ut, the last thing that Sri Lanka wanted. Nevertheless, they are down to their last pair with 197 still required to win while the Kiwis are just a wicket away from victory. Meanwhile, Thirimane brings up his half-century quick and in a good style.
OUT! Suranga Lakmal 6 (15)
Sri Lanka 133/6 | Overs 62
Lahiru Thirimanne 29 (95), Suranga Lakmal 0 (2)
GONE!!!!! Sri Lanka are tumbling and they are perfectly down to the business end with the tail-enders as a couple of quick wickets have done so. Dinesh Chandimal and Rangana Herath get dismissed on consecutive deliveries by Mark Craig, but the hat-trick is avoided by Suraj Lakmal who defends it well.Still 234 runs behind.
Sri Lanka 133/6 | Overs 55.4
Lahiru Thirimanne 24 (87)
Prasanna Jayawardene departs for 10, as Sri Lanka move closer to an embarrassing defeat on the final day. Jayawardene was beginning to look good after hitting a couple of boundaries, but seemed to throw all caution to the wind in the final shot when he decided to whack the delivery by Mark Craig, pitched outside off, towards the covers, where Kane Williamson collects the ball safely in his hands.
OUT! Prasanna Jayawardene c Williamson b Craig 10 (37)
Sri Lanka 131/5 | Overs 52
Lahiru Thirimanne 22 (74), Prasanna Jayawardene 10 (28)
Sri Lanka resume their innings after the end of the lunch break, with New Zealand, with Mark Craig being introduced into the attack after long spells of pace, with a getting the sixth wicket in their kitty without much delay. The Sri Lankans would hope for the current pair to prevail as a strong partnership is the need of the hour for the tourists.

Sri Lanka 110/5 | Overs 42.3
Lahiru Thirimanne 11 (45)
New Zealand enter lunch on the final day in grand fashion as they manage to remove Sri Lankan skipper Angelo Mathews on a score of eight from 11 balls. Edges a good length delivery by Doug Bracewell towards the slips, where Kane Williamson fumbles for a brief moment, before completing a one-handed catch. Sri Lanka lose their fifth wicket with just 110 runs on the board as they seem to be headed towards an inevitable collapse.
OUT! Angelo Mathews c Williamson b Bracewell 8 (11)
Sri Lanka 93/4 | Overs 40.2
Lahiru Thirimanne 7 (43), Angelo Mathews 0 (0)
Sri Lanka lose their fourth batsman as Kaushal Silva departs almost immediately after bringing up his seventh Test fifty. Yet another blow for the visitors as they are fast running out of batsmen in their chase of the challenging 390-run target.
OUT! Kaushal Silva c Craig b Bracewell 50 (121)

Sun out now – SL are 81-3, Bracewell from the Southern End now, Mark Craig from the RA Vance #nzvsl ^RI

Sri Lanka 81/3 | Overs 35
Kaushal Silva 39 (107), Lahiru Thirimanne 6 (25)
Silva and Thirimanne are going steady at the moment, too cautious to play any risky shots at the moment. Only one boundary has been hit since the fall of the third wicket. Another wicket at this stage should pretty much seal the deal for the hosts.
Sri Lanka 61/3 | Overs 25
Kaushal Silva 26 (71), Lahiru Thirimanne 0 (0)
The Kiwis have got the big fish! It is Sangakkara who has to depart on a single-digit score as the visitors have been handed their biggest blow of the match so far, with 329 runs still left to be chased. Trent Boult has been bowling brilliantly in the day so far as New Zealand look to close in on their prey. The Sri Lankan fans meanwhile, are praying for a miracle from Lahiru Thirimanne and Silva.
OUT! Kumar Sangakkara c Watling b Boult 5 (18)
Sri Lanka 51/2 | Overs 18.4
Kaushal Silva 21 (51), Kumar Sangakkara 0 (0)
Trent Boult strikes early for New Zealand as Sri Lanka lose their second-wicket. Dhammika Prasad, who was sent as a nightwatchman for the visitors, as he edges a short-pitched delivery to the slips, where Jimmy Neesham completes a fine catch. In comes Sanga, who will be bearing the burden of the Sri Lankan hopes at the moment.
OUT! Dhammika Prasad c Neesham b Boult 6 (27)

Hello and welcome to CricketCountry’s coverage of the fifth day of the second and final test between New Zealand and Sri Lanka at the Basin Reserve in Wellington on Wednesday. We will bring you the live updates of the final day of the Test. Read the stumps report of Day 4

The fourth day belonged clearly to New Zealand, with Kane Williamson and BJ Watling defied the Sri Lankan bowlers to notch up the highest-ever sixth wicket stand, worth 365 runs, to guide New Zealand to a massive score of 524 for the loss of five wicket, setting the visitors a target of 390 win. While Williamson struck his maiden Test double-hundred, remaining unbeaten on a score of 242, which turned out to be the seventh highest individual Test score by a New Zealand batsman, wicket-keeper batsman Watling brought up his highest Test knock by finishing on a score of 142 not out.

The Sri Lankan bowling were made to look like a bunch of rookies throughout the day, in contrast to their exploits on the previous day where they had restricted the Kiwis to a score of 159 for five at one stage. Nuwan Pradeep, who had caused much of the damage in the early part of New Zealand’s second innings, remained the leading wicket-taker for the visitors with a haul of three wickets for 117 runs. Rangana Herath and Dhammika Prasad took a wicket each while conceding 154 and 102 runs respectively.

Sri Lanka face a daunting prospect on the final day of the second Test if they are to sign out of the ongoing series with some pride. New Zealand are currently leading the series 1-0 after an eight-wicket win in the first Test at Christchurch, and will look to go for the kill in the final day, having already removed Dimuth Karunaratne on 17. The visitors were batting on a score of 45 for one at the time of declaration of stumps. 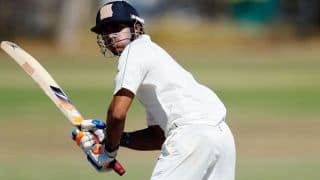 Ranji Trophy 2014-15: Bengal is in driver's seat against Tamil Nadu