Sri Lanka have brought themselves back in the series with a bang.

(With the series tied level at 1-1, both New Zealand and Sri Lanka would start from the scratch again and look to draw the second blood to go ahead in the series. Catch all the action here)

The match has been finally called off due to excessive rain, which caused the pitch to be deemed unfit for play, with the series continuing to be level at 1-1. New Zealand had a genuine chance of setting a major total for Sri Lanka, in order to gain a 2-1 lead in the series. That however, was not to happen as the rain gods decided otherwise. Martin Guptill was the highlight of the New Zealand innings as he struck four boundaries and three sixes during his stay at the crease, while Sri Lanka skipper Angelo Mathews once again proved his worth when he took three wickets for 21 runs in under seven overs at an economy of around three. The two sides now head to Nelson for the fourth ODI.

Play continues to be delayed as the weather at Auckland keeps getting worse from the cricketing point of view. It was going great for the Kiwis as they were cruising at a score of 131 for the loss of one wicket. There is a high chance of the game getting called off due to the continuous drizzle that has kept the covers on the field for more than half-an-hour now.

The rain break did its part in breaking the flow of the Guptill-Latham partnership, with the latter departing to the pavilion not long after the resumption of play. Latham managed to hit a boundary, before falling prey to Mathews by getting an inside edge onto the stumps while trying to play a delivery that was pitched slightly outside off towards third man. Ross Taylor came in to bat next, but he could barely make an impact. He was ultimately trapped leg-before by Mathews, who took his third wicket in the process. Taylor decided to go for the review, which ultimately went against him.

It has begun to rain here at the Eden Park in Auckland, which has reduced the number of overs per side to 47. New Zealand are currently on top, reaching a score of 131 for the loss of one wicket, with Martin Guptill bringing up his 20th ODI half-century. The Kiwis were off to a strong start courtesy some big-hitting by Brendon McCullum. The hard-hitting skipper however dismissed by Angelo Mathews, his Sri Lankan counterpart. Guptill and Latham then went on to stitch a brilliant partnership, that has remained unbeaten so far. The number of overs, which currently stands at 47, might get reduced even further due to the loss of time.

New Zealand and Sri Lanka battle in the third One-Day International (ODI) at Auckland. New Zealand had won the first ODI followed by a Sri Lankan victory. Thus, these two teams go into the third game looking to take the lead in the series. It has been a very competitive series and one can expect the same in this match. Currently, Martin Guptill and Tom Latham are carrying New Zealand forward in this game. They have already struck a fifty run-stand and are moving along nicely. Guptill would be wanting to get some runs on the board and move into a good rhythm ahead of the ICC World Cup 2015. With the short ground in Auckland, the big hitters from both sides would fancy their chances of clearing the boundaries and piling on the runs.

That’s it.. Finally .. The word comes through.. No result here in Auckland.

NZ 145/3 | Overs 28.5
Martin Guptill 66 (78),
Mathews is all over the Kiwis at the moment as he takes his third wickets of the innings, trapping Taylor leg-before off a delivery that was well-pitched. The umpire raises his finger, with Taylor going for the review immediately. Replays show the ball would have kissed the top of the middle and leg stump.
OUT! Ross Taylor lbw Mathews 3 (8)
NZ 139/2 | Overs 27
Martin Guptill 63 (74), Ross Taylor 0 (1)
Mathews strikes for Sri Lanka, and this time with a change of pace. Bowls a slower one that is in line with the stumps, with Latham succumbing to the temptation to send it towards third man. Gets an inside edge and deflects the ball towards the stumps.
OUT! Tom Latham b Mathews 42 (65)
NZ 131/1 in 25 overs
M Guptill 61 (72), T Latham 36 (56)
Guptill has reached his fifty. It has been a very good innings today. He got to the milestone by smashing Thisara Perera for a six down the ground. A good innings by Guptill so far, guiding New Zealand to a position from which they can set a major target for the Sri Lankans. The players are going off from the field as the heavens have opened up.
NZ 106/1 in 22 overs
M Guptill 45 (61), T Latham 28 (49)
This has been a very good partnership for New Zealand. They have brought up their fifty-run stand. Here, they have two batsmen, who are looking to get into good rhythm ahead of the big event starting next month.

Rain interruption! There is a forecast of scattered rain and we are going to witness a few of these interruptions, but hopefully it would not affect the whole game.

New Zealand 79/1 | Overs 15
Martin Guptill 33 (45), Tom Latham 13 (23)
No harm done following McCullum’s departure as Guptill and Latham take control of the innings. few close calls coming in for Sri Lanka, but not going their way. they should hang on as it’s just the beginning and there is plenty more to come.
New Zealand 45/1 | Overs 9
Martin Guptill 11 (29), Tom Latham 1 (3)
GONE!!! First breakthrough for Sri Lanka and it’s the big wicket of the in-form skipper, Brendon McCullum who fails to fire this afternoon and is dismissed for 28 off the skipper as well, Angelo Mathews. Tom Latham comes in.
OUT! Brendon McCullum c Kulasekara b Mathews 28 (22)
New Zealand 32/0 | Overs 6
Brendon McCullum 27 (19), Martin Guptill 4 (17)
Another good five overs for the Kiwis and McCullum looks to be in a good form as he continues the good run from the previous two matches. He is in a mood to punish the bowlers. Let’s see, what’s in store for today.
New Zealand 2/0 | Overs 1
Brendon McCullum 1 (1), Martin Guptill 1 (5)
Good start to the opening over of the game. Nothing much interesting has happened except for the fifth ball which almost carried to Kulasekara off Guptill. Only a couple added on the board.

Hello and welcome to CricketCountry’s coverage of the third ODI between New Zealand and Sri Lanka at the Eden Park in Auckland on Saturday. I am Ayush Gupta, and I will be bringing you the live updates from the what is expected to be another exciting contest.

With a magical turn around in the last game at Hamilton, Sri Lanka have brought themselves back in the series with a bang, thanks to Tillakaratne Dilshan‘s blistering knock of 116 that took the game away from the Kiwis. Apart from him, other Sri Lankan batsmen too contributed their part to earn the victory by six wickets.

New Zealand, who were the favourites heading into the last game were unfortunate, even after skipper, Brendon McCullum‘s exquisite knock of 117 going in vain, courtesy of four unfortunate run outs that changed the whole scenario of the game. Although the batsmen did give enough to manage a total of 248 on the board, but considering the immense talent of Sri Lanka, the total was not enough and was chased down comfortably by the islanders.

In the team composition; skipper, Brendon McCullum would look to go in with two to three pacers and a spinner considering the conditions at Hamilton suitable to fast and seam bowlers while Sri Lanka too would look for the same combination with spin being their greatest option. However, considering the pitch, it is surely to assist advantage to both bowlers and batsmen and the teams going with whatever combination could help them in any basis. 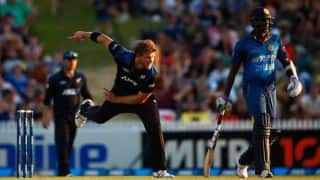 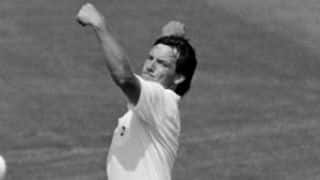