New Zealand will go into the match full of confidence having registered a ODI series win over Sri Lanka.

By Pramod Ananth and Paulami Chakraborty

Good Morning! Hello and welcome to CricketCountry’s live coverage of the first T20 International (T20I) between New Zealand and Sri Lanka at Mount Maunganui. This is Pramod Ananth along with Paulami Chakraborty and we will be bringing you live updates of the match. New Zealand will be going into the series full of confidence having won the One-Day International (ODI) series 3-1. They will look to win the T20I series as well. The two-match series will be their final sets of matches ahead of the ICC World T20 2016, which begins in India in March. Sri Lanka on the other hand will look to bounce back from the ODI series loss, where they offered a bit of resistance, but could not take another step and win it. Live Scorecard: New Zealand vs Sri Lanka, 1st T20I at Mount Maunganui

Live cricket score Sri Lanka 179/9 | Overs 20| BATTING: Jeffrey Vandersay 4(1), Suranga Lakmal 1(1): And that’s it. The hosts win the match by 3 runs and lead the series 1-0. Sri Lanka batsmen showed real class and gave a good fight but in the end they fell short of just 3 runs. Gunathilaka and Siriwardana’s performance with the bat is what the team can take as positives from this game while they need to improve their fielding skills.

Live cricket score Sri Lanka 164/7 | Overs 18| BATTING: Nuwan Kulasekara 10(5),Chamara Kapugedera 13(10): Siriwardana departs but the match is up for grab for both the teams. 19 needed off 12 balls and it can go in favour of any of the teams. The bowlers can finish it off but they need to hit hard.

Live cricket score Sri Lanka 138/6 | Overs 15| BATTING: Milinda Siriwardana 41(28),Chamara Kapugedera 0(0): Sri Lanka continue losing wickets as Perera goes for 28. The game has taken some interesting turns as the visitors need 45 runs off 30 balls which is quite possible. Siriwardana looks set and he will have to take on the responsibilities to score the necessary runs while Kapugedera is also a good batsman played lower in the order by Mathews.

Live cricket score Sri Lanka 94/5 | Overs 12| BATTING: Milinda Siriwardana 23(18), Thisara Perera 5(9): Sri Lanka is in danger now. Gunathilaka looked quite set and after his dismissal it is hard to find any proper batman who can pull off batting till the end and gift their team the much-wanted victory.

Live cricket score Sri Lanka 81/4 | Overs 9| BATTING: Milinda Siriwardana 18(11), Danushka Gunathilaka 46(28): Gunathilaka and Siriwardana take their side to a much comfortable position as their innings looks a lot more sorted. These two batsmen need to stay there till the end and finish things off. They need to protect their wicket while score big.

Live cricket score Sri Lanka 56/4 | Overs 6| BATTING: Milinda Siriwardana 11(3), Danushka Gunathilaka 29(17): Things are getting worse with every over as they lost yet another wicket and it is a big one. Angelo Mathews goes for 4. Siriwardana is at the crease now and these two batsmen currently playing have kept alive the hopes of all the Lankan supporters. They need to settle down fast and start hitting big.

Live cricket score Sri Lanka 33/3 | Overs 4| BATTING: Angelo Mathews 0(1), Danushka Gunathilaka 22(12): And the start has not been good at all for the visitors. They have lost three of their important wickets and it is the skipper Mathews now at the crease. He is one dependable batsman and has led his team to many victories. Mathews will have to do the same here as well, as teams needs his best game now.

Live cricket score New Zealand 182/4 | Overs 20| BATTING: Grant Elliot 10 (6), Ross Taylor 22(9): Great piece of end-overs bowling by Sri Lanka as they managed not to give away a lot of runs. Taylor added some important runs towards the end as he hit 3 fours and a sixer. Sri Lanka bowlers have done a great job and helped their side make a comeback after New Zealand’s power packed batting in the first ten overs.

Live cricket score New Zealand 163/3 | Overs 18| BATTING: Colin Munro 20 (15), Ross Taylor 14(5): Jayasuriya drops a sitter as Munro sends it towards deep point! New Zealand lost 3 wickets meanwhile and Corey Anderson disappointed with his 2 in his comeback match. Brilliant display of bowling here by Jeffrey Vandersay and Nuwan Kulasekara. Taylor goes off the mark with a boundary and hits 3 of them in a row.

Live cricket score New Zealand 131/1 | Overs 15| BATTING: Colin Munro 20 (15), Kane Williamson 53 (41): Though they have lost a wicket, the Black Caps have another 5 overs to go and they need to hit hard and not let the run rate go down. Munro’s first boundary came as he sent Dilshan straight for a sixer and ended the over with a four towards point.

Live cricket score New Zealand 105/1 | Overs 12| BATTING: Colin Munro 2 (5), Kane Williamson 45 (27): After a fiery knock of 58 off 34, Guptill departs. A direct hit from Chamara Kapugedera and bulls eye! Guptill failed to reach at time. Pour of runs have stopped and Sri Lanka are back into the game. Williamson is inching towards his half century.

Live cricket score New Zealand 97/0 | Overs 10 | BATTING: Martin Guptill 57 (33), Kane Williamson 40 (27): Guptill is in destructive mode here. A boundary and a sixer in the last over. He is getting full support from the other end as Williamson is also hitting hard, assuring at least one boundary in every over.

Live cricket score New Zealand 67/0 | Overs 7 | BATTING: Martin Guptill 39 (22), Kane Williamson 28 (20): both Guptill and Williamson are going strong at the moment. They are matching each other short for short. Sri Lanka in desperate need of a wicket. Their skipper is rotating the bowlers but to no effect.

Live cricket score New Zealand 49/0 | Overs 4| BATTING: Martin Guptill 32 (13), Kane Williamson 17 (11): Guptill is smashing his way around well at the moment and Williamson too has begun to open up just a little bit. What a superb start for New Zealand.

Live cricket score New Zealand 27/0 | Overs 2| BATTING: Martin Guptill 25 (9), Kane Williamson 2 (3): New Zealand off to an explosive start with Guptill smashing Lakmak for 14 runs off the very first over. Williamson just looking to give Guptill the strike at the moment. Similar treatment for Perera as he concedes 13 in his first over. We could be in for another Martin Guptill special here!

TOSS: Sri Lanka have won the toss and have elected to field first

Kane Williamson will lead the Black Caps in the absence of Brendon McCullum. McCullum will not be a part of the World Cup in India as he recently announced his retirement and will play his last international match in February. New Zealand sufered a blow when they found out that their strike bowler Tim Southee will miss the T20I series due to injury. Matt Henry has been named as his replacement. Henry has been in good form of late and finished the ODI series as the leading wicket-taker. READ: New Zealand vs Sri Lanka 2015-16, 1st T20I at Mount Maunganui, Preview: Hosts look to continue dominance

Sri Lanka have some excellent fast bowlers in their ranks as well. The likes of Dushmantha Chameera, Isara Udana and others will be looking to exploit the conditions and put their teams in good positions. Dinesh Chandimal will lead the side in the absence of their regular skipper Lasith Malinga, who is out injured. Sri Lanka will hope that he recovers in time for the World Cup. 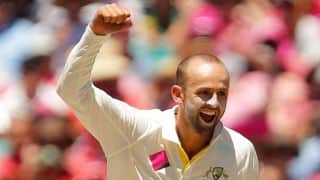