Welcome to CricketCountry's live coverage of Day 1 of the first of the two-match Test series between New Zealand and Sri Lanka in Dunedin.

By Amit Banerjee and Rishad DSouza

Good Morning! Hello and welcome to CricketCountry’s live coverage of Day 1 of the first of the two-match Test series between New Zealand and Sri Lanka at the University Oval in Dunedin. I am Amit Banerjee along with Rishad D’Souza, and we will be bringing you the live updates from this game. New Zealand, who are coming off a 0-2 Test series loss on their tour to Australia, would aim for a frsh start in this series and the home advantage could just work in their favour. Sri Lanka, on the other hand, who lost their last Test series back at home to India in September too would aim for a turnaround in New Zealand. However, it could well prove to be an uphill task for them. Who would draw first blood in this tie. Catch all the updates here. Live Cricket Scorecard, New Zealand vs Sri Lanka 2015-16, 1st Test at Dunedin

LIVE CRICKET SCORE: NZ 409/8 in 90 overs; BATTING: Doug Bracewell 32(39), Neil Wagner 0(8): Extremely eventful final hour and Sri Lanka will be happy with how they pulled things back there. But, New Zealand are still well in front of them. Had Sri Lanka bowled with as much intent through the course of the day, it could have been a lot rosier picture for them. In the final hour or so they caused a lot of damage. Martin Guptill was dismissed for 156 by Angelo Mathews. Tim Southee fell for two. BJ Watling fell for a lowly score too. OUT! BJ Watling 5(8) c Vithanage b Chameera, OUT! Martin Guptill 156(234) c Chandimal b Mathews, OUT! Tim Southee 2(2) c Siriwardana b Lakmal

LIVE CRICKET SCORE: NZ 363/5 in 79 overs; BATTING: Martin Guptill 145(220), BJ Watling 4(5): Things have bettered for Sri Lanka just a little bit in the last few overs. Brendon McCullum tried to play the slog sweep one time too many and fell to the bowling of Siriwardana after mistiming one, but not before smashing 75 off 57 deliveries. Mitchell Santner came out with positive intent but was done in by the extra pace of Chameera in the 79th over for a run-a-ball 12. New Zealand are still well on top at this stage. OUT! Brendon McCullum 75(57) c Vithanage b Siriwardana, OUT! Mitchell Santner 12(12) c Chandimal b Chameera

LIVE CRICKET SCORE: NZ 313/3 in 70 overs; BATTING: Martin Guptill 128(195), Brendon McCullum 58(44): In a partnership of 68 runs, Brendon McCullum has contributed 58 runs and even though he’s been attacking most balls, he’s not offered a single chance to the deflated Sri Lankans. He got to his half century of the 39th delivery he faced. Not an ideal time for the Sri Lankans in the Test match right now.

LIVE CRICKET SCORE: NZ 287/3 in 67 overs; BATTING: Martin Guptill 128(193), Brendon McCullum 34(29): Brendon McCullum is in his usual punishing mood. In the last five overs he has smashed seven boundaries including three consecutive boundaries of Nuwan Pradeep in the 63rd over. He has latched on to anything short or even back of a length. The fuller deliveries have not been spared either. he is in his groove and that is not good news for the visitors.

LIVE CRICKET SCORE: NZ 253/3 in 62 overs; BATTING: Martin Guptill 124(183), Brendon McCullum 3(9): Ross Taylor’s stay at the crease on a juicy batting surface was rather short-lived. He faced all of 12 balls to score just eight runs. He fell to Nuwan Pradeep leg before and Sri Lanka will have a sniff now with the hope to end the Day One on a high note. Brendon McCullum and Martin Guptill are at the crease now. OUT! Ross Taylor 8(12) lbw Pradeep

LIVE CRICKET SCORE: NZ 229/2 in 54.5 overs; BATTING: Martin Guptill 111(161), Ross Taylor 0(0): And its tea on Day 1 of the first Test, with Nuwan Pradeep managing to get the much-needed breakthrough of the solid second-wicket partnership by removing Kane Williamson for 88 off the last ball of the session. Martin Guptill earlier brought up his third Test century (his first in four years/40 innings!) in 147 deliveries, getting to the evasive milestone with a boundary off Lakmal, with New Zealand’s 200 also coming up around the same time. Williamson, who displayed a brilliant run of form against a hostile Australian attack last month, was in line to get to his 13th Test ton when Karunaratne took a sharp leaning catch in the slips. Read the tea report of Day 1 here. OUT! Kane Williamson c Dimuth Karunaratne b Nuwan Pradeep 88(123)

LIVE CRICKET SCORE: NZ 172/1 in 40 overs; BATTING: Martin Guptill 85(127), Kane Williamson 58(67): Rangana Herath and Dushmantha Chameera are introduced into the attack at this stage of the game, though Guptill and Williamson show no sign of playing any loose shots. The duo however, have been relatively quieter in the last 10 overs or so, with the boundaries not coming that often for the hosts. Meanwhile, Guptill is approaching his third Test century, which he will hope to complete before tea.

First century partnerships between Guptill and Williamson in the 16 times they batted together in Tests. Prev best: 75 v Zim, Bulawayo, 2011

LIVE CRICKET SCORE: NZ 158/1 in 35 overs; BATTING: Martin Guptill 74(106), Kane Williamson 55(58): Guptill and Williamson have consolidated magnificently after the dismissal of Tom Latham, with the duo completing the 100-run stand between them in the 35th over. Williamson, meanwhile, has brought up his 17th Test fifty in just 53 deliveries, carrying his brilliant run of form over from the Australia series, while Guptill has struck 14 boundaries so far to move to 74.

LIVE CRICKET SCORE: NZ 114/1 in 27 overs; BATTING: Martin Guptill 53(83), Kane Williamson 32(33): The Black Caps are progressing beautifully at the moment, with Guptill having completed his 15th Test fifty and Kane Williamson batting in the 30s. The partership between the two is worth 58 at the moment, as the Sri Lankans desperately aim to curb the dangerous-looking partnership before it causes an irreversible damage. A score of 114 for 1 after 27 overs is certainly a strong one, and New Zealand coach Mike Hesson will be a proud man during the break. Read the lunch report of the opening day here.

Kane Williamson into his work early with some signature back foot stroke play through the off-side. Moves to 13, Guptill *34, NZ 74/1 ^WN

LIVE CRICKET SCORE: NZ 74/1 in 20 overs; BATTING: Martin Guptill 34(57), Kane Williamson 13(17): Guptill and Latham are looking solid, bringing up the 50-run opening stand, before the latter has to depart after getting getting caught and bowled off the bowling of Suranga Lakmal for a 46-ball 22. Latham’s dismissal brings the flamboyant and in-form Kane Williamson, currently among the top Test batsmen in the world, to the crease. Guptill is currently batting in the 30s. OUT! Tom Latham c & b Suranga Lakmal 22(46)

LIVE CRICKET SCORE: NZ 42/0 in 10 overs; BATTING: Martin Guptill 22(34), Tom Latham 15(26): The Guptill-Latham have got their side off to a decent start and are about to complete the 50-run opening stand. Meanwhile, skipper Angelo Mathews introduces himself into the attack in the eighth over.

LIVE CRICKET SCORE: NZ 26/0 in 5 overs; BATTING: Martin Guptill 17(20), Tom Latham 9(10): The Black Caps are off to a decent start after being put to bat by the Sri Lankans. The New Zealand innings starts off with a maiden, before Guptill hammers the first boundary of the innings with a fine stroke towards mid-off. Guptill has struck four boundaries so far, and looks in good touch. Meanwhile, Pradeep and Lakmal have opened the bowling for the Sri Lankans.

The BLACKCAPS have lost the toss and will bat first at University Oval #NZvSL #backtheblackcaps https://t.co/MBNWvoH8Bp

In their most recent series Sri Lanka beat West Indies 2-0, while New Zealand were at the receiving end of an identical scoreline in an away series in Australia. However when New Zealand open their home summer with the first Test against Sri Lanka at the University Oval, Dunedin, they will begin as the clear favourites. A lot of factors render the most recent results of the two participating teams inconsequential to their fates in the upcoming clash. New Zealand vs Sri Lanka 2015-16, 1st Test at Dunedin, Preview 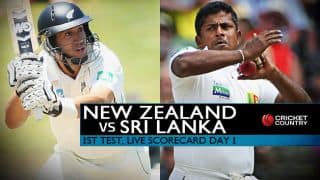